Sometimes I am asked to recommend a camera for entry into astrophotography. Of course, my first answer is to use the camera and lenses you already have. On top of that, it’s hard to recommend a specific brand and model because I don’t have every camera at my disposal, and we’re lucky (damned?) with a steady stream of new and improved cameras. Here are some ideas.

First, let me say I’ve been taking astrophotos since the age of the dinosaurs (in the movie days). Second, while I’ve used a variety of brand-name cameras (Sony, Panasonic, Canon, Pentax, Fuji) for travel and other purposes, my go-to cameras were Nikon for “serious” shooting. I also have a few dedicated astrophotography cameras in use.

But two years ago, I decided to modify my “consumer” camera for astrophotography. When the camera is described as modified for astrophotographing, this means that the response of the camera’s sensor has extended further to the red end of the spectrum to capture the astronomically significant hydrogen alpha (H-alpha) emission line. This is done by removing/replacing the infrared blocking filter, which cuts slightly at the deep red end of the optical spectrum. While normal daylight images taken with this camera can be re-balanced to appear “natural”, if accurate standard color reproduction is necessary, a modified camera should not be used.

Although there are special factory-produced versions of commercial cameras (such as the Nikon D800a and Canon 60DA), they are built in limited production and likely sold out while you’re reading this. They are also “behind” the current models and more expensive than the standard models. However, these have the advantage of including built-in daylight color balance and additional firmware features for astrophotos, such as the possibility of longer exposures.

The other option is to have an outside camera or astronomy equipment dealer adjust the camera to remove the standard infrared filter and replace it with one that passes over the Alpha H line. In fact, having a third party adjust the camera gives you more options such as removing the infrared filter entirely to allow Capable of capturing infrared images (blocking out visible wavelengths) or even UV images.

In addition, third-party modifications allow for a filter selection that allows more H-alpha light to pass into the sensor than factory-designed Astro models, which use more aggressive infrared cutoffs to keep daylight performance closer to standard models. But note that whichever replacement filter option is selected, the filter must match the factory filter so the focal point may not be altered, or the standard lenses for that camera may not have focus.

As a longtime Nikon shooter having made a range of F mount lenses, it made sense to opt for a modified Nikon body. However, I took this opportunity to also try out the mirrorless camera body. In fact, I did a full 180-degree flip and went with a Canon RP chassis (26 MP, full frame, mirrorless). why? One answer is that this camera was not intended to replace any of my “regular” cameras.

I wanted to modify a camera for red sensitive astrophotography, and thanks to the choice of a mirrorless camera body I could get an F mount lens adapter, making it perfectly compatible with my existing camera and telescopes lenses. Additionally, the thickness of the lens adapter allowed me to get (imported from Japan), an adapter that allows insertion of filters (58mm, threaded) as well as a 3-point tapered ring that allows the camera to be rotated freely and locked in any framing direction. Other brands of adapters subsequently became available, allowing filters to be easily and quickly installed and replaced in filter trays. For my use, I’ve found that having to quickly switch filters isn’t important. 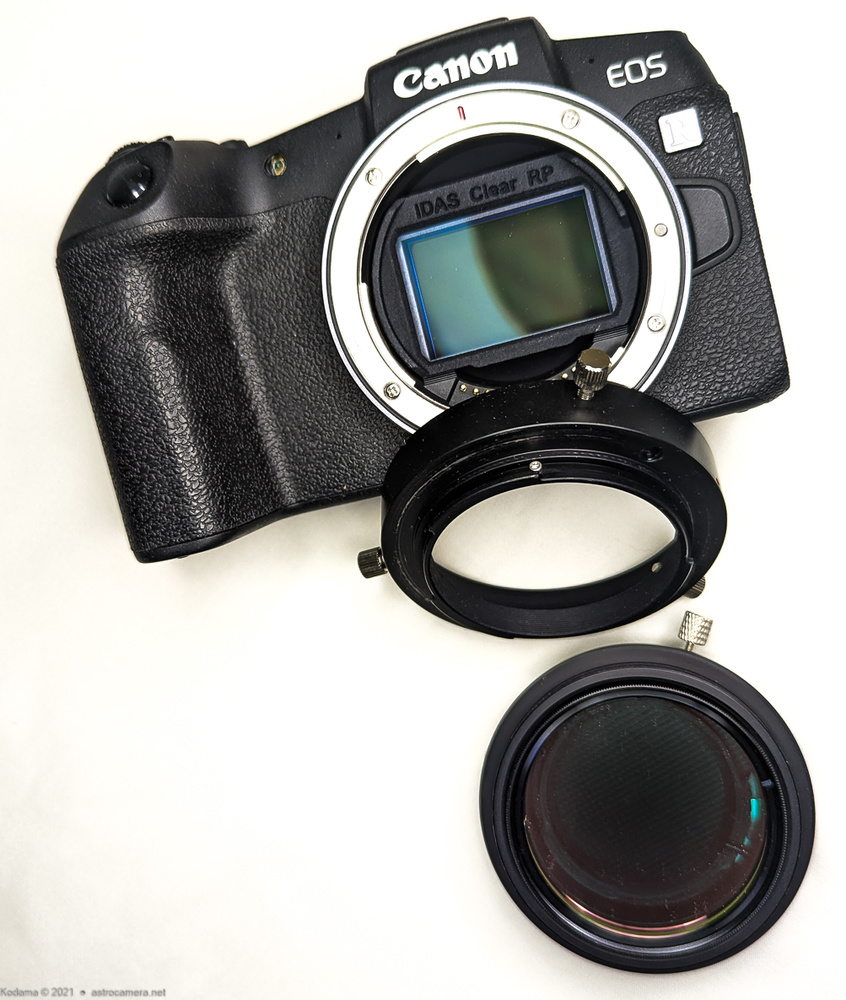 Of course, an important concern was the cost of the camera body. Anyone modifying the camera body will certainly void the warranty and possibly render it beyond repair in the eyes of an authorized factory repair facility. The Canon RP printer currently retails for around $1000, which is good value for a full-frame mirrorless camera (in my opinion), and cheap enough to “try on”.

Why are interchangeable filters an important point? For most astrophotographers, light pollution is a problem, so better results can be obtained by using special astronomical filters in the optical path. These aren’t cheap, but for most astrophotographers, they should be considered “a must-have” items. For my situation, my default astrophotography setup includes a light pollution filter designed to selectively block out bands where light pollution sources contribute a lot to interference. These are the notable emission ranges found in fluorescent lamps, mercury vapor lamps, and sodium lamps commonly used outdoors. Also filtered by the IDAS filter I use is the natural source of “light pollution” from oxygen at high altitudes. Despite the complex bandpass of this specialized filter, it is able to maintain a color balance that does not require many post-processing adjustments. 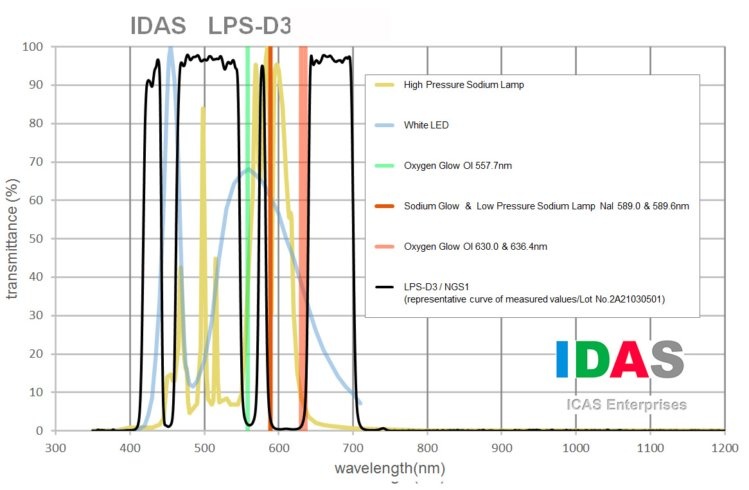 Unfortunately (for astronomers), the lights that are blocked are easily replaced by LED lights, which are of a wider range and difficult to block selectively. In this case, for many astronomical objects, the problem can be attacked from a different direction: use filters that block everything except light from astronomical targets. This works with many misty objects deep in the sky, and targets that glow with ionized hydrogen (H-alpha) and oxygen (OIII) light. These dual-band filters are often called narrow-band, because they have narrow lanes in H-alpha (dark red) and OIII (blue-green) and work well with mirrorless cameras and DSLRs with color sensors to give a relatively natural color balance ( important to stars) while improving the contrast of the target opacity. 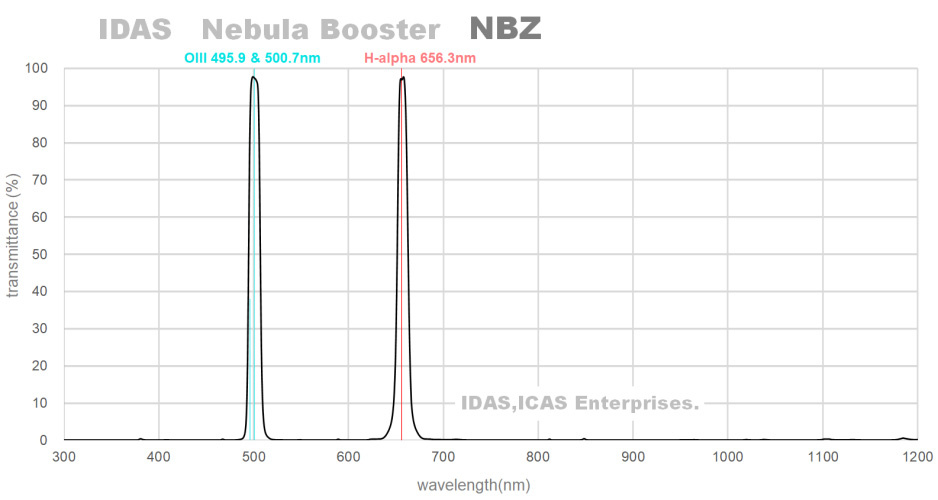 Although the narrowband H-alpha filter can be said to be lost on a color matrix camera because only red pixels are used in the sensor, I also tried the (very) narrowband H-alpha filter. This isolates the H-alpha light of the emission blur, which is at the red end of the visible spectrum. This light is scattered in our atmosphere to a lesser degree than light from the blue end of the spectrum, and is therefore less affected by human-caused light pollution and even moonlight. The end result is that even under moonlight, extremely faint targets can be photographed successfully.

In the image above (full moon superimposed on a scale), the remnants of a supernova explosion that occurred 40,000 years ago can be seen although it was photographed while the half-luminous moon was 83 degrees in the sky. The actual appearance of the haze in the image is pure red (like filtered stars) as one would expect for an H-alpha, but has been converted to a monochrome image for presentation so it can be seen more easily on screen.

The image above shows the region around Orion’s belt star Alnitak, including the horse’s head and flame nebulae. This photo was taken with the moon rising in the sky, 73 degrees, five days before the full moon phase.

Why not choose a “real” astronomical camera?

Experienced astrophotographers may wonder why I don’t use a “real” astronomical camera. After all, they have the advantage of active cooling, which significantly reduces noise. In addition, true monochrome cameras are available, which have better resolution because the pixels are not split between the R, G, and B filters.

The reason behind this is that astronomical cameras always need an external computer to operate. Usually this is a traditional laptop (usually Windows) and all the complications associated with setting up the computer. While this may not be very important in an observatory setup, having to bring a computer adds a lot of extra weight, complications, and reduces reliability in mobile devices. It is true that very small computers (such as the Raspberry Pi) are available, and one still needs at least another tablet or phone to control the computer besides a properly configured network wire or WiFi network. And while the additional cooling and noise reduction would be nice, modern cameras perform very well as long as you don’t have to shoot in very hot places.

A monochrome astronomy camera will indeed provide better resolution and sensitivity for the same sensor size, but for color shots additional filters (and exposures) are required along with the complexity of the filter wheel for filters R, G and B and additional filter sequence control software. Add in the frustrating prospect of getting only two of the three required colors before the clouds cut through, and my enjoyment of astrophotography will begin to wane.

Another factor that cannot be ignored is the fact that a full-frame camera such as the Canon RP is much less expensive (even after modification) than a full-frame astronomy camera, especially if an additional computer and/or tablet is not already on hand to support the camera.

So, how did the Canon RP work for me? The short answer is that I am very happy with it, especially since I only use it for astrophotography. As expected, the camera UI took some tweaking, but I wasn’t expecting anything. I was able to quickly get to the point of using it in the dark with only the limited functionality I needed for astrophotography.

I was easily able to find an AC adapter to replace the rather small battery, which enabled me to work through the night without worrying about tires losing due to the battery running out or worrying about the camera overheating because the battery had overheated with heavy use.

With the addition of an external programmable intervalometer, I am able to set and forget for as long as my telescope mount will allow shooting. In addition, in flashlight mode, the camera screen displays the exposure time elapsed on the back screen. Even without an intervalometer, the Canon RP can shoot continuous frames (up to 30 seconds), which makes it suitable for night time-lapse movies (such as meteor sequences) as well.

Although I prefer the “real” optical viewfinder for a DSLR, the camera’s viewfinder is not important to my use in star photography as long as the camera has a live LCD backlight. The display on the Canon RP’s rear LCD is fine for focusing, although I would like better if the magnified view provides at least twice the magnification to ensure perfect focusing.

I’ve heard some Canon camera users complain about fixed banding patterns on long exposures, but in my use (up to 10 minutes), I haven’t had any problems with excessive banding or random noise. The high ISO range (up to 40,000) is great for taking quick in-frame shots. I usually downgrade to ISO 1600 for actual photo frames.