Getting your first tripod is a balance between affordability and quality. This tripod from K&F Concept might be a good start.

Tripods are one of the most universal accessories for photographers. Early on in your journey as a photographer, you would find a reason to keep your camera in a certain position whether to take a photo with you in it or to explore what long exposures could do. While most photographers, later on, find a tripod that fits some needs that are specific to their genre and its workflow, the importance of quality in a starter tripod should never be taken for granted.

The qualifications for a beginner’s tripod are very obvious. It has to be able to hold the camera. However, many things come into play when you want your first investment in a tripod to be worth it and not something you will regret. For one, it shouldn’t just hold the camera but do so securely. The second is that while the tripod should be able to support relatively heavy camera setups, it shouldn’t be too heavy itself. Lastly, the tripod should last a certain amount of time, at least enough to justify the expense. In this review, we’ll take a look at this $55 starter tripod from the K&F concept and see if it is worth trusting. 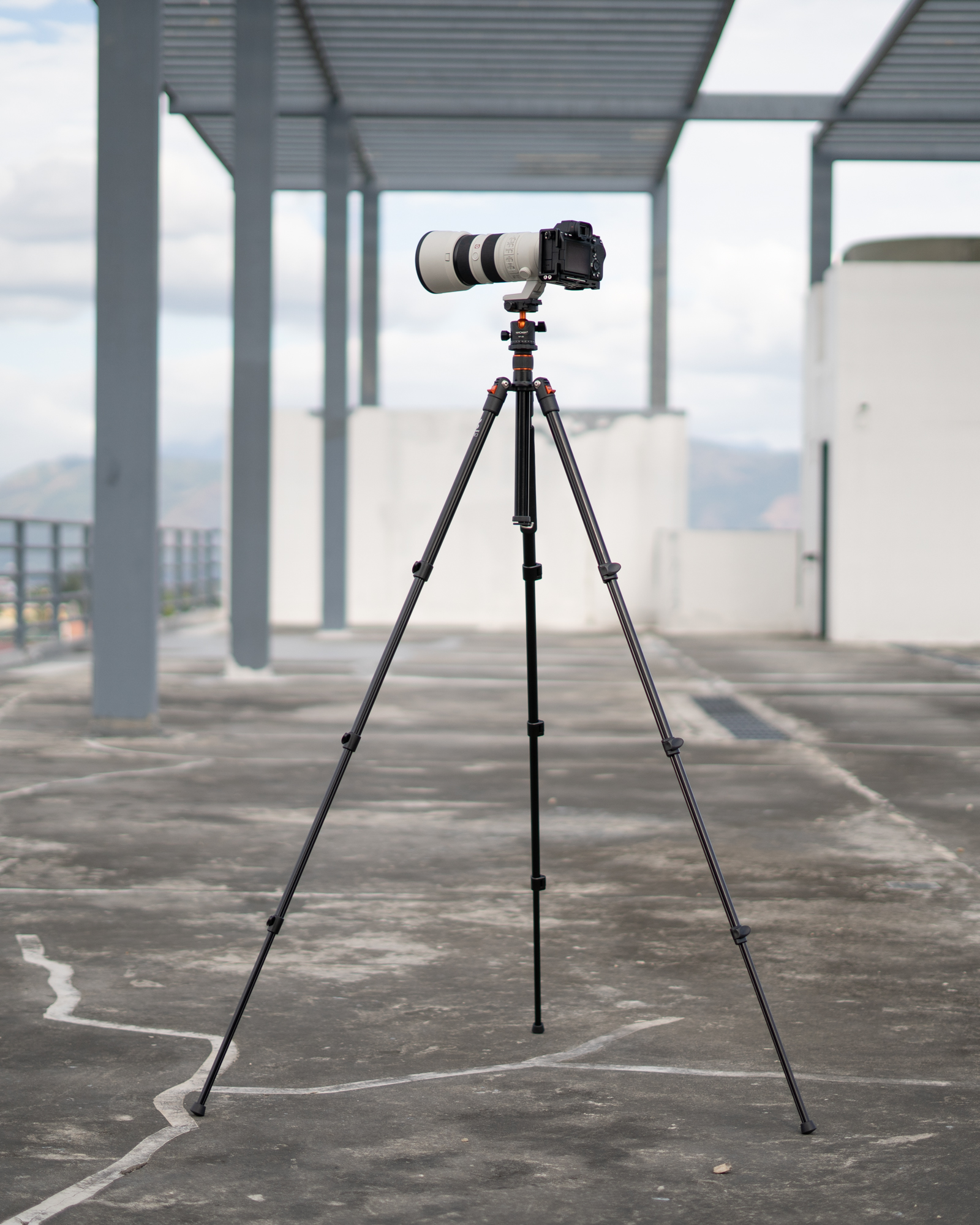 The K&F SA234 tripod is a four-section aluminum tripod. The main shafts comprise lightweight black aluminum while the joints, clip locks, and head are made mainly of hard plastic. The tips of each leg are reinforced with non-slip rubber feet for added friction. 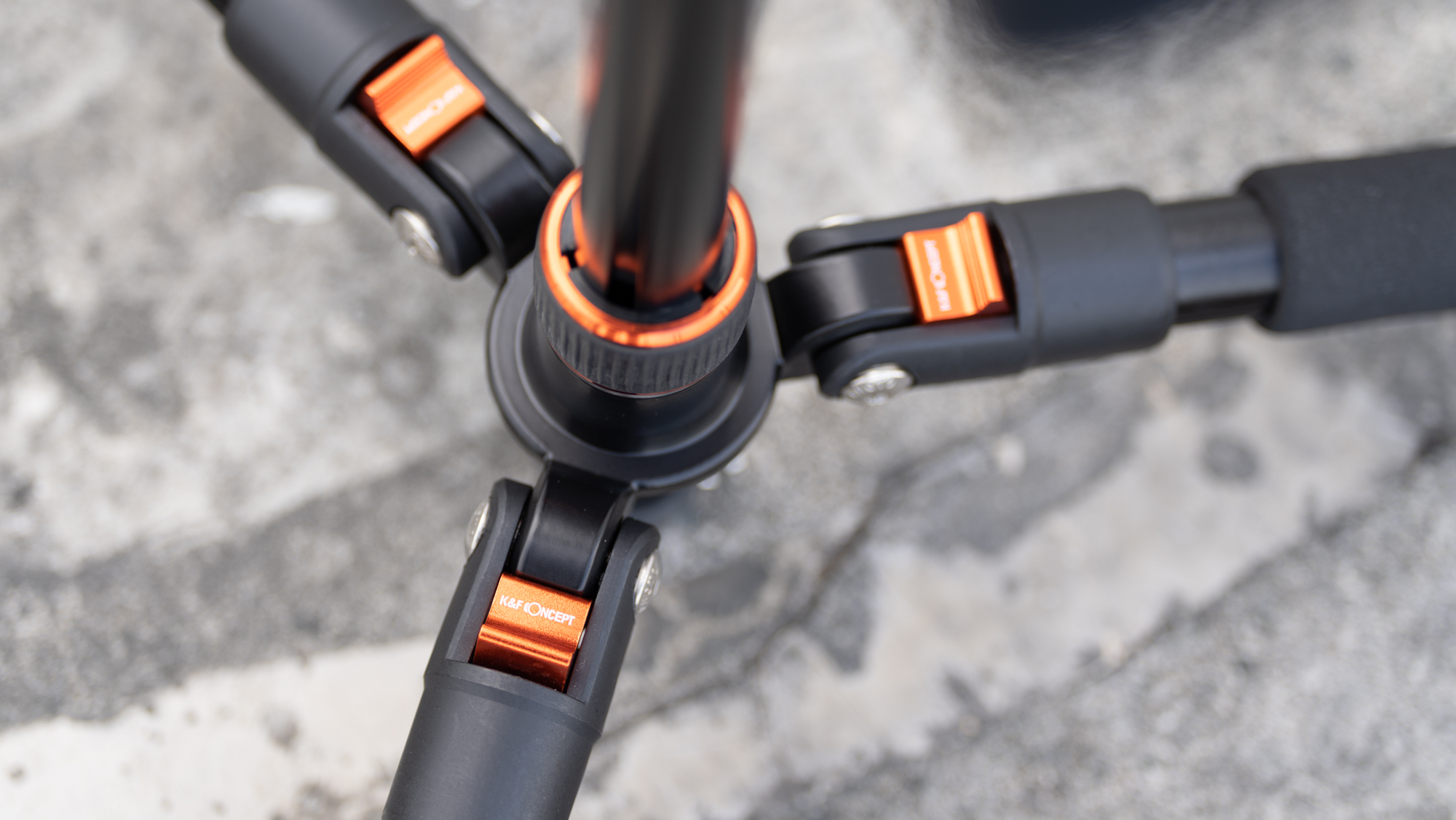 The central joint is made of an orange accented unlock button that releases the joint, allowing the tripod’s legs to extend up to a 180-degree angle to have the legs nearly flat on the ground. However, this feature is partially obstructed by the non-removable center column, which prevents the camera angle from being as low as the legs make it possible. The center column is controlled by a single twist-lock mechanism that allows the overall height to extend an extra eight inches. 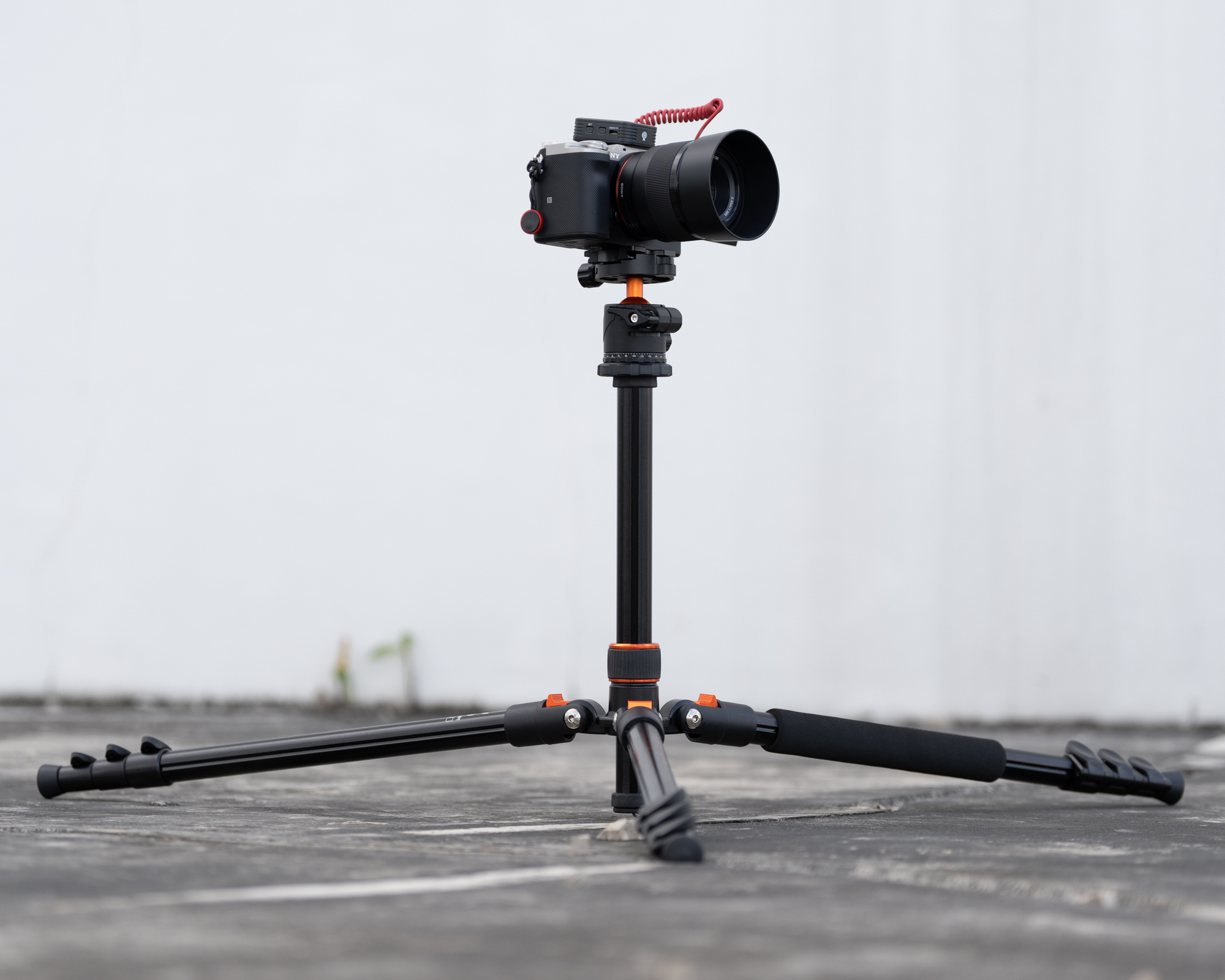 With the joint unlocked, the three legs can be folded towards the extended center column for a more compact size when in storage and transit, which is typical of most travel-sized tripods in the market. While the legs prove to be sturdy when in use, the unimpressive feature of this tripod’s construction is perhaps the small and thin clip-type locks. While the locking mechanism works as it should, the appearance and density of its construction make long-term durability a bit questionable.

The KF SA234 comes with an included ball-head. This head is covered in matte and textured hard plastic with metal parts on the weight-bearing sections. It features an orange ball joint with a maximum tilt of 90 degrees. The head comes with 2 knobs in opposite directions. The larger knob controls the ball friction for more gross pan, tilt, and yaw movements, while the smaller knob controls a 360-degree panning movement from the bottom plate of the head. Conveniently, this ball-head features an Arca-Swiss compatible quick-release clamp that can accommodate most camera base plates and L-brackets. 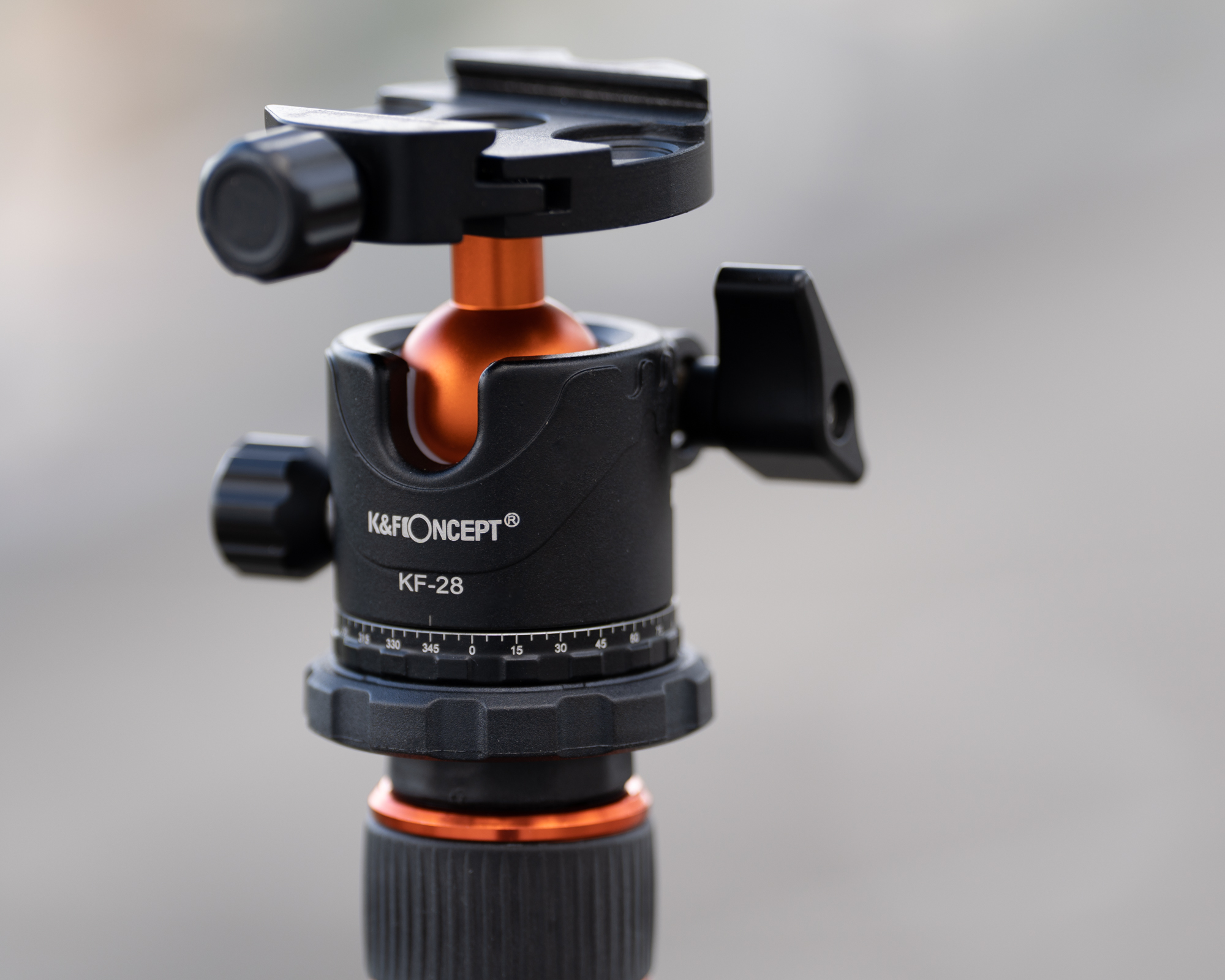 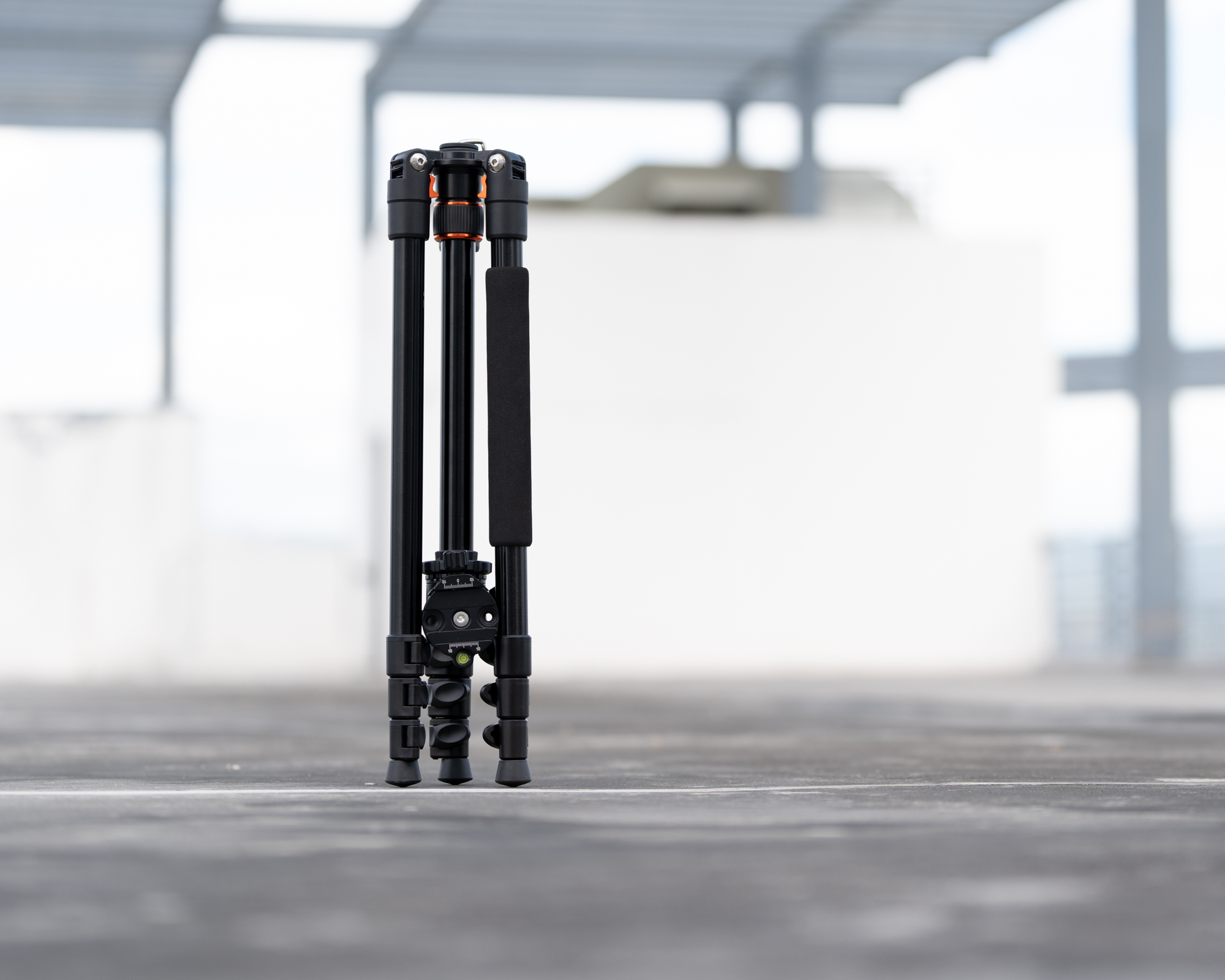 When fully folded and with the legs inverted, the KF SA234 is just 16 inches long. This makes it relatively compact enough to be easily carried on side holsters or backpacks, or even inside larger camera bags. The minimum standing height is 21.8 inches. When all leg sections are extended, camera height would be at 53 inches with the center column down and 64 inches with it fully extended. Overall, the tripod gives sufficient height options that should be enough for most applications, especially considering coming from a 16–inch folded length. 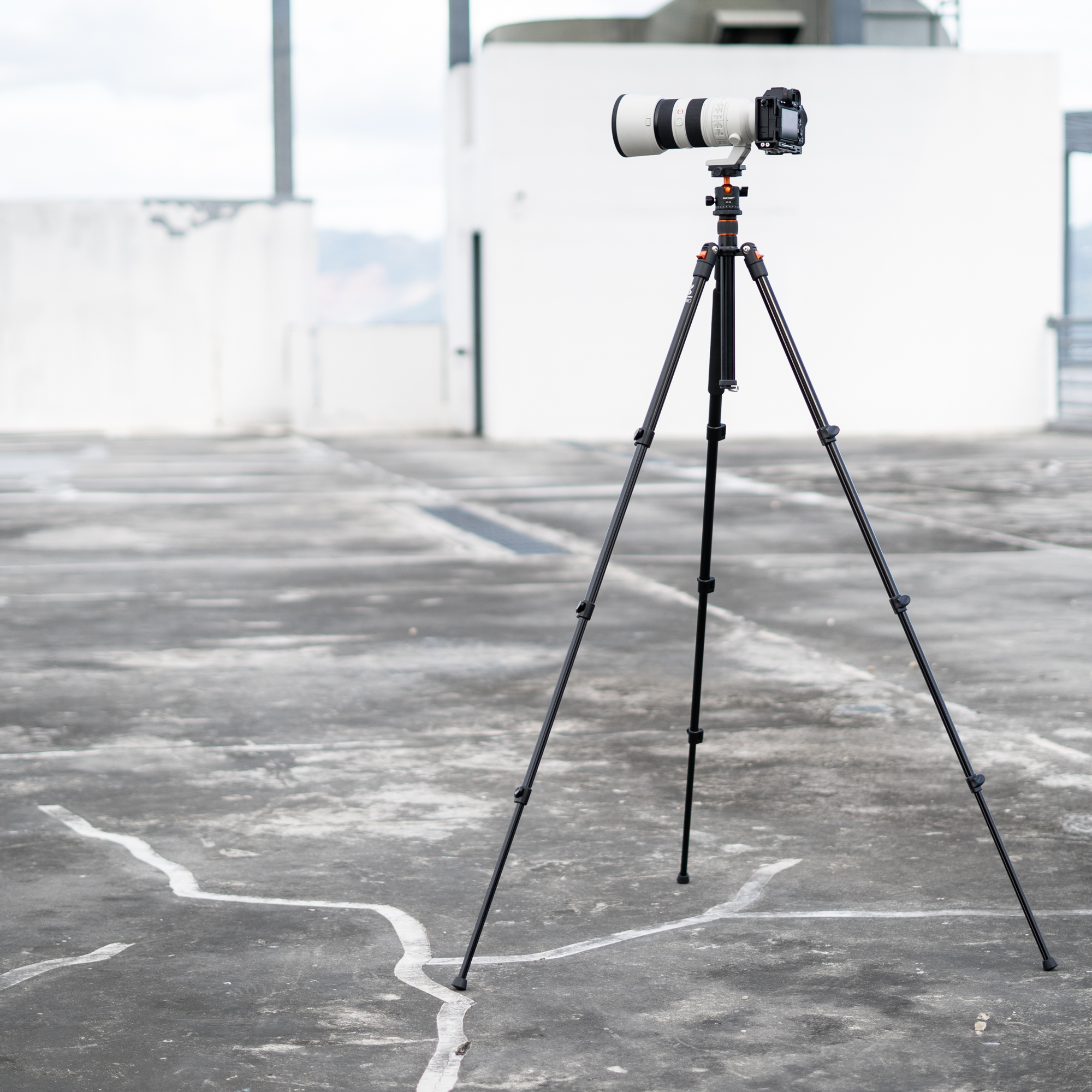 The K&F SA234 weighs just 1.2 kilograms, which is lightweight, especially for an aluminum tripod. Considering that, it gives a significantly good payload of about 10 kilograms, enough to carry much more than what a beginner setup likely weighs. In this example, the tripod is carrying a Sony a7I V with a Sony 70-200mm f/2.8 GM II that has a combined weight of approximately two kilograms. While the camera and lens combination is relatively light, it’s enough to illustrate the possible use of the tripod since most entry-level cameras would weigh less. On the other hand, using a heavier DSLR combination would add around another two kilograms, which would still be way below the payload limit. Tilted to one side, the ball joint also gives quite reliable friction enough to carry the said camera setup without sliding down. 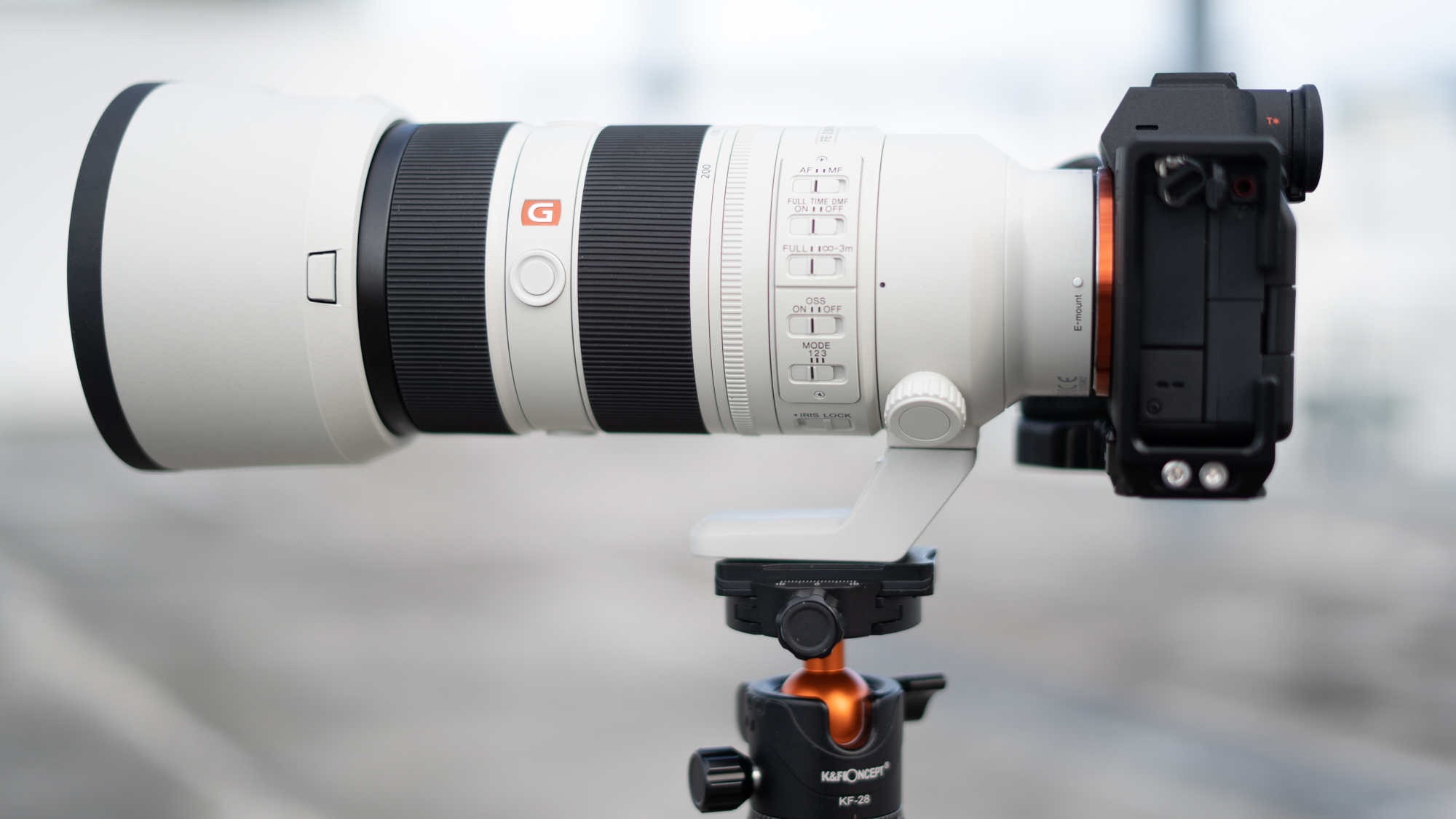 Out of the box, this tripod would be very useful in most general photography situations. That includes some quick exposures, timed or remotely triggered shots, indoor use, as well as gentle outdoor conditions that do not deal with significant wind or water currents. 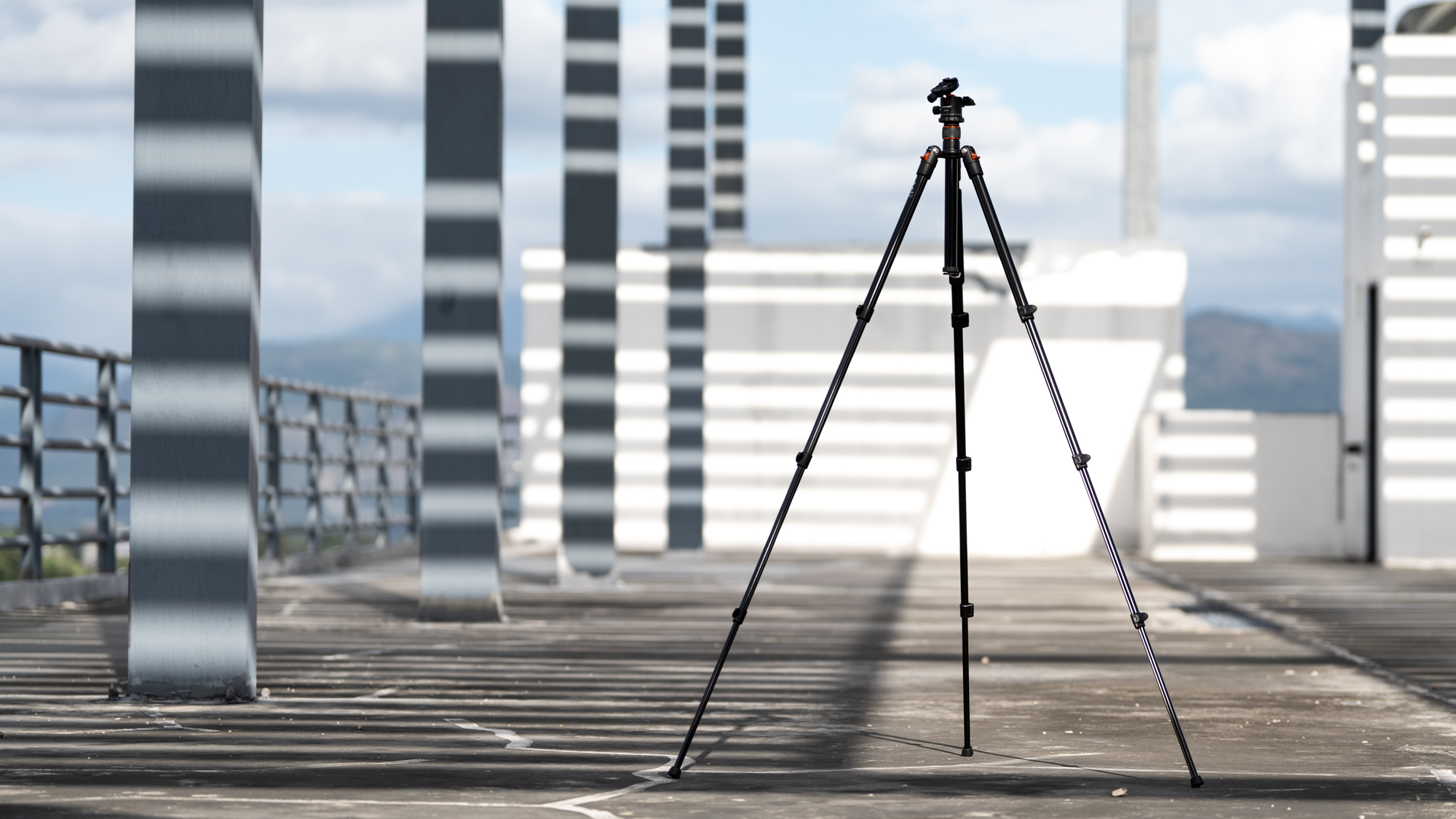 Generally, this would also be a good starter travel trip given the benefits of its lightweight construction and compact folded length. This tripod would be very handy to be brought around when exploring various locations and wouldn’t be much of a bother considering the negligible weight that it adds to your bag. For landscape photography, the K&F SA234 would suffice for relatively calm environmental conditions. However, if the location involves moderate to extreme wind, being submerged in water with a significant current, or repeatedly being exposed to moisture, sand, or saltwater, this might not be the most reliable tripod to use. The significant lightweight construction may lead to shakes and vibrations that would affect the resulting image when shooting long exposures. The aluminum material may be susceptible to oxidation and corrosion, especially when exposed to saltwater. Lastly, the plastic clip locks may be quite a chore to maintain and may be easily affected by exposure to sand and saltwater.

Overall, the K&F concept SA234 tripod is a very capable starter tripod that would be extensively useful for photographers starting. It offers a good payload while significantly light, it comes in a sufficient height while relatively compact, and the included ball-head is Arca-Swiss compatible. Best of all, the $55 price tag makes it affordable for photographers starting or those who seldom use tripods and want to keep one just in case.

What Can Be Improved: