There are a lot of sayings bandied around in photography that sound impressive but are meaningless. However, an image being greater than the sum of its parts is something we should heed as it is the basis of how our minds perceive images. Here are seven ways to achieve this.

Learning the rules of photography is important. If we study why a photograph looks great, then our eye for a good composition helps us to create well-composed images without thinking about it. For instance, many novice photographers start out by learning the rule of thirds. Like riding a bike, framing a shot in this way becomes natural. Next, they may discover leading lines, and those become part of their subconscious too. Then they might investigate the golden ratio and delve into color theory. As they become ever more advanced, so the new compositional techniques become embedded in their minds too. With enough practice, those too are used without conscious thought.

People often spout that we should break photographic rules. However, even when doing that, we are usually applying other established techniques instead, even if we are not necessarily aware of them.

But have you ever thought about why certain compositions work and others don’t? It is all to do with how our brains process the scenes set before us. Delving into this can help us perfect our photography.

When we look at the world around us, our minds organize the objects we see, grouping them in certain ways that allow us to perceive the scene holistically. It’s as well that we see groups of objects and not individually, as we would be overcome with sensory overload.

The closer objects are to one another, the more likely we are to group them together. For example, when we stand back and look at a building, we see the wall, not particular bricks. Likewise, we observe a copse and not the individual trees. Move closer and the groupings become different; we see the whole tree. However, not all its individual parts are acknowledged in our minds. If we get closer still, then each of those smaller features form their own groups: leaves, twigs, and bark patterns. However, we don’t find the veins of the leaves, the lichen growing on the twigs, or the insects hiding between the bark’s contours. This kind of grouping is known as the law of proximity.

Moreover, a murmuration of starlings is perceived as a single body and not as each individual bird. Yet, the mind sees this collection of birds as a shape in the sky. It’s that shape that our brain primarily notices. 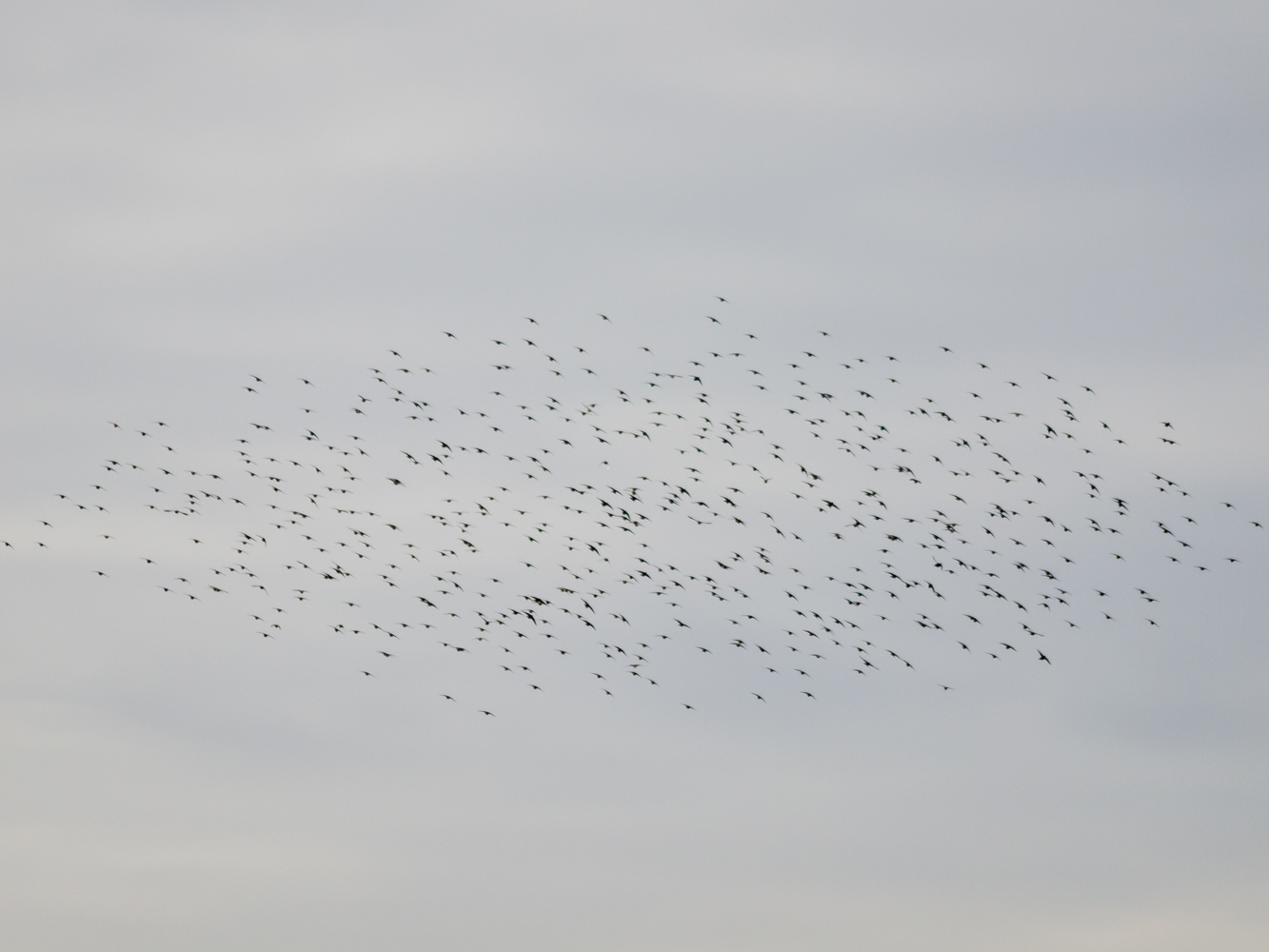 We also see a stone circle as a circle and not a collection of individual stones. This is because your mind fills in the blanks, creating shapes that don’t really exist. That process helps us to simplify a scene, it is what is known as the law of closure. In other words, we cannot help but see the overall shape formed by the grouped objects.

Perhaps the most well-known demonstration of the law of closure is the following diagram. Named after an Italian psychologist who designed the first version of it, the Kanisza triangle makes the mind believe a black triangle exists when there are only three circles with pizza slices cut from them. You also assume the existence of a white triangle, when there are, in fact, three V shapes.

Additionally, the mind also has an expectation that group items will act together, behaving as one object and not individually. This is known as the law of common fate. For example, in the following shot, the kayaks are grouped in our minds as one entity and the arctic terns another. We expect both of those groups to behave independently of the other, but coherently within their own set. 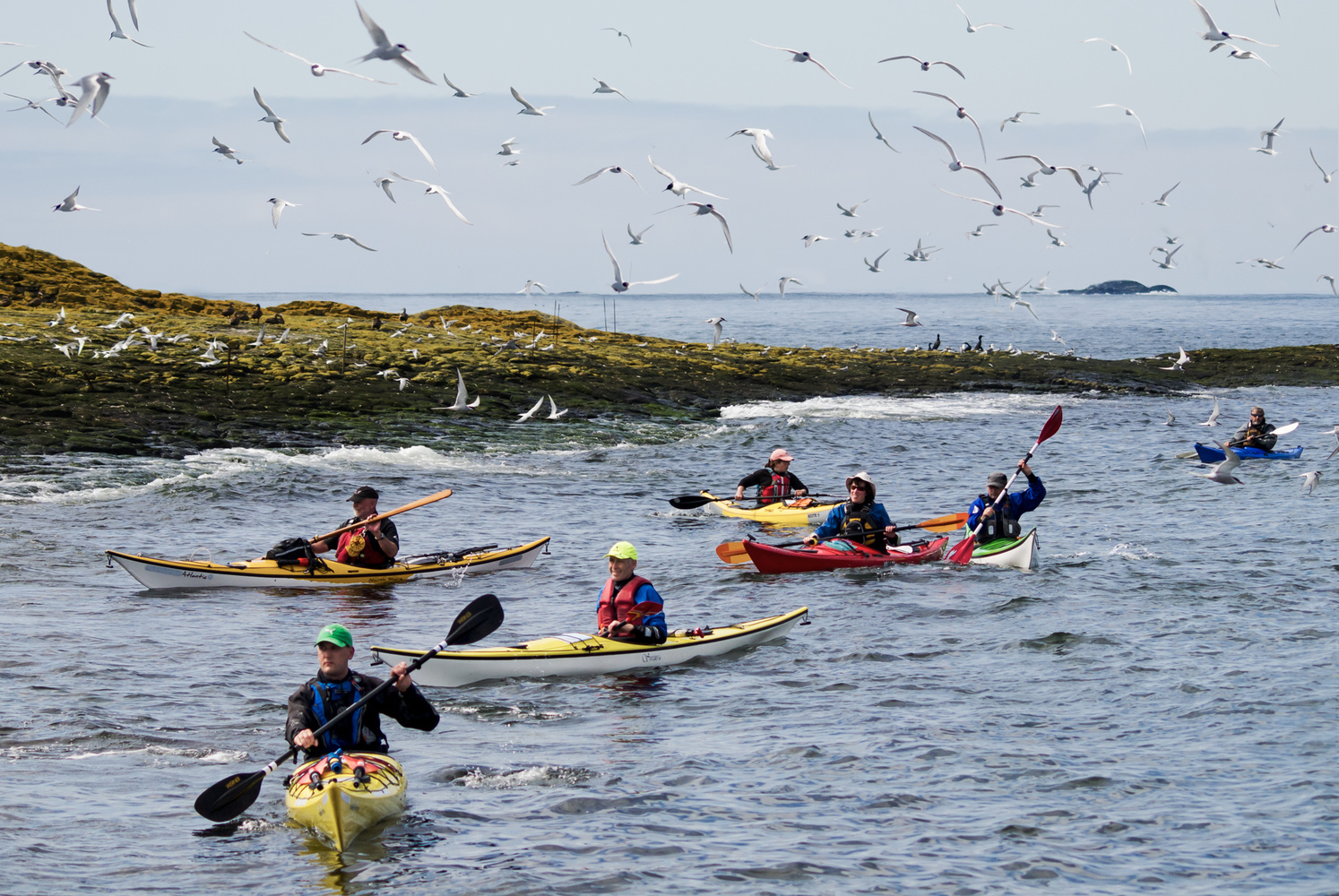 The proximity of individual elements, like the bricks in the wall, the leaves on a tree, and the flock of birds, is just one way of our mind groups objects. But how about when items are further apart? The mind also groups objects together if they are similar. This can be in color, size, shape, or form. If some items within a frame look alike then, even if they are not in proximity with one another, we will still group them together if they are similar in some way. Of course, this is known as the law of similarity.

Removing distracting elements, and reducing clutter, usually works well in photography. This is because the human mind is drawn towards simplicity. Yes, of course, it’s called the law of simplicity. That goes beyond removing subjects from the frame. The mind creates order in complex shapes and patterns to simplify what we see. Think of the constellations of stars. We look at the sky and see the shape of Orion, but that is only in our mind’s eye. In reality, its nearest star, Bellatrix, is only 245 light-years away from Earth, whereas Alnilam 1342 light-years distant. There is nothing connecting these two stars except the pattern that has been recognized around the globe since ancient times.

In photography, simplicity can also be brought by creating balance in an image, which is pleasing to the human mind. Symmetry is a basic form of balance, and there are other means of achieving it too, which I will talk about in a future article.

The law of good continuation states that the mind will extend shapes and lines beyond their endpoint. In landscape photography, we may have a fallen branch in the foreground that points to a subject at the distance, or there may be a series of rocks that point away to the horizon. The viewer’s eye follows that line, drawing an invisible line between them.

Another thing we photographers often do is to try to make the subject stand out from its background. If an image is cluttered with many similar-looking objects, then the point of focus will be lost. We use various tools to make the subject stand out from the background, such as selective lighting, shallow depth of field, and the choice of subject color. This allows the chosen subject to be perceived.

These seven laws are part of what is called Gestalt theory. Although stemming from some sometimes-flawed psychological ideas that originated in Austria and Germany at the start of the 1900 – observed objects don’t visually mirror themselves in our brains – the modern approach to the theory does help us to understand why certain compositions work and others don’t. We can utilize these techniques to draw the eye to the parts of the photograph that we want the viewer to pay attention to.

Gestalt theory explains that minds like simplicity, and that is achieved by grouping elements in a scene. We also automatically fill in missing gaps, where there is sufficient information to do so. Thus, the whole image is greater than the sum of its parts because of the connections the mind makes between objects. It also states that the mind jumps from seeing the individual elements to understanding the entire picture.

By learning and understanding the principles, we can speed up or slow down the time it takes for the viewer to understand the meaning of our photographs. We can also choose whether we want to abide by the standard constraints that are applied to our photos, or instead deliberately break these and seek disharmony. After all, a lot of photography is shot for art’s sake, and good art almost always challenges the established and accepted practices.

This article is just lightly touching the surface of Gestalt theory; There are plenty of resources online and books on the subject, and I am planning to revisit some of those rules in their own articles. It is widely used in design and psychology, and its tools can be applied across all arts, so there is no reason why we should not consider it as another useful set of tools for photography.

It would be great to see some of your images in the comments where one or more of the Gestalt rules apply, and I would really enjoy hearing your thoughts on the subject. Thank you for reading.