With so many plugins out there to choose from and with nearly everyone trying to emulate old film looks, is this new plugin worth considering? Check out our review.

There are a lot of plugins out there for creating digital film looks. Some do pretty much what you would expect them to do in ways that you can’t control. Others take a bit more precision but are still limited by the fact that they are trying to emulate old stocks. With so many presets out there to choose from, it’s easy to lose sense of context or comparison. Dehancer is one of those plugins that doesn’t quite fit into either of these categories. It is not exactly a preset pack, but it is not a plugin either, at least not in the conventional sense. It doesn’t give you the typical slider controls that most plugins do; Rather, it offers you a list of film stocks and assigns each one a numerical value that represents its effect on your image. In other words, instead of sliding controls and hoping for the best, Dehancer helps you achieve specific looks by giving you precise numerical values ​​for each look so that you can achieve them every time with ease.

Now, there’s a lot of controversy in this area, with everyone having different opinions on what a film look should be. We all have our interpretations, with the problem being that there are so many different looks out there, with most of them touted as looking like a specific stock. This is why Dehancer sparked my interest. Between its use of film profiles, halation, bloom, and grain editing techniques plus other finite adjustments, Dehancer promises to make all digital images look like they were shot with old film stock.

The Dehancer plugin works in both Photoshop and Lightroom, with the interface being the same for both. The interface is simple and uncluttered but has some powerful features for emulating film. I am currently testing the beta version, and I hope there won’t be too many changes if anything in the final release, as it’s intuitive and easy to use. 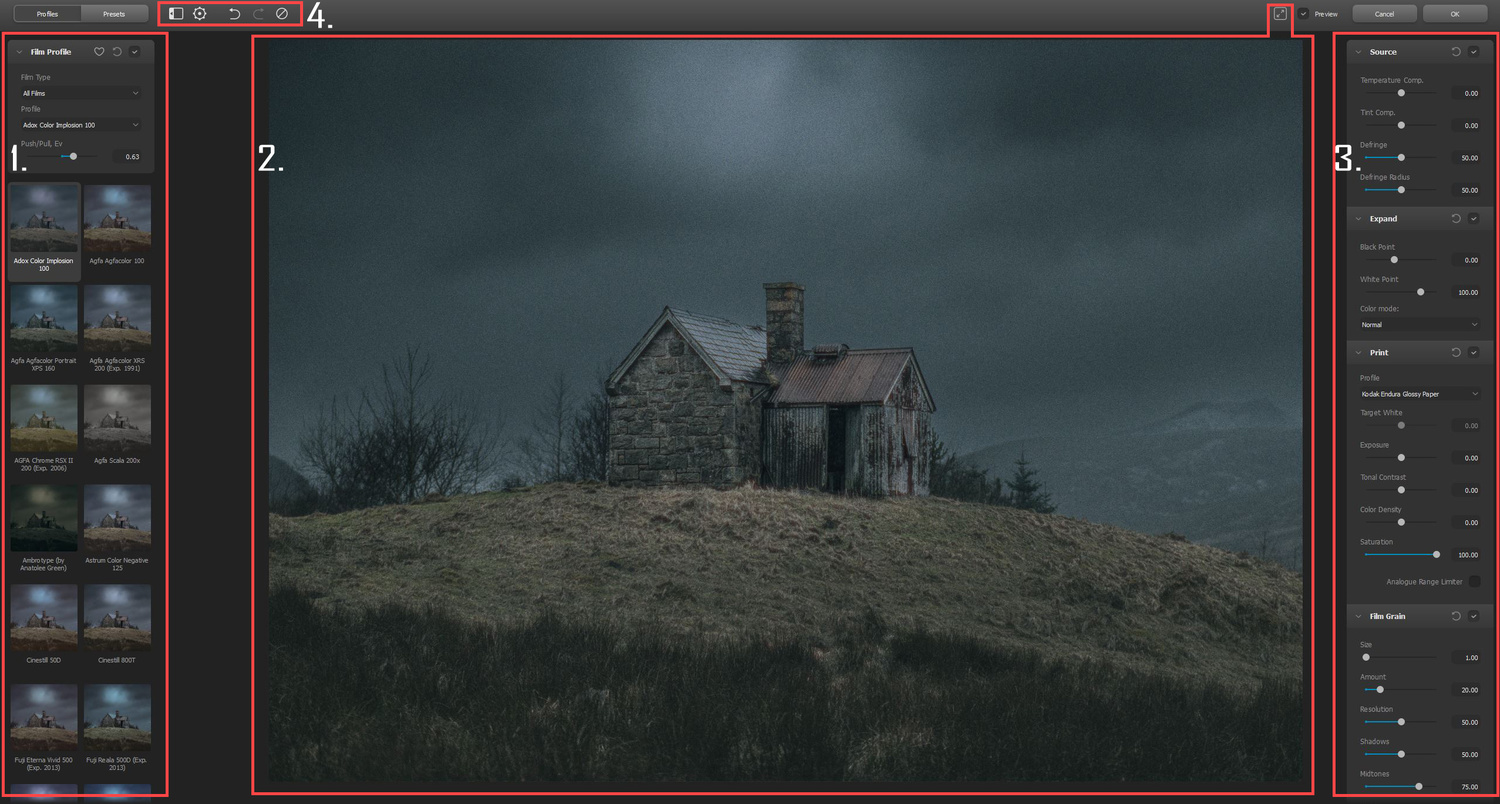 The editing sidebar is collapsible, allowing you to work as you see best. Each of the editing parameters is based on calculations of the film profile and not just a slider to increase or decrease the effect. As I edited my images with the panels, even with slight movements of the sliders, the difference was clear, and I was impressed by how much work has gone into the backend of the software to produce the results it does. 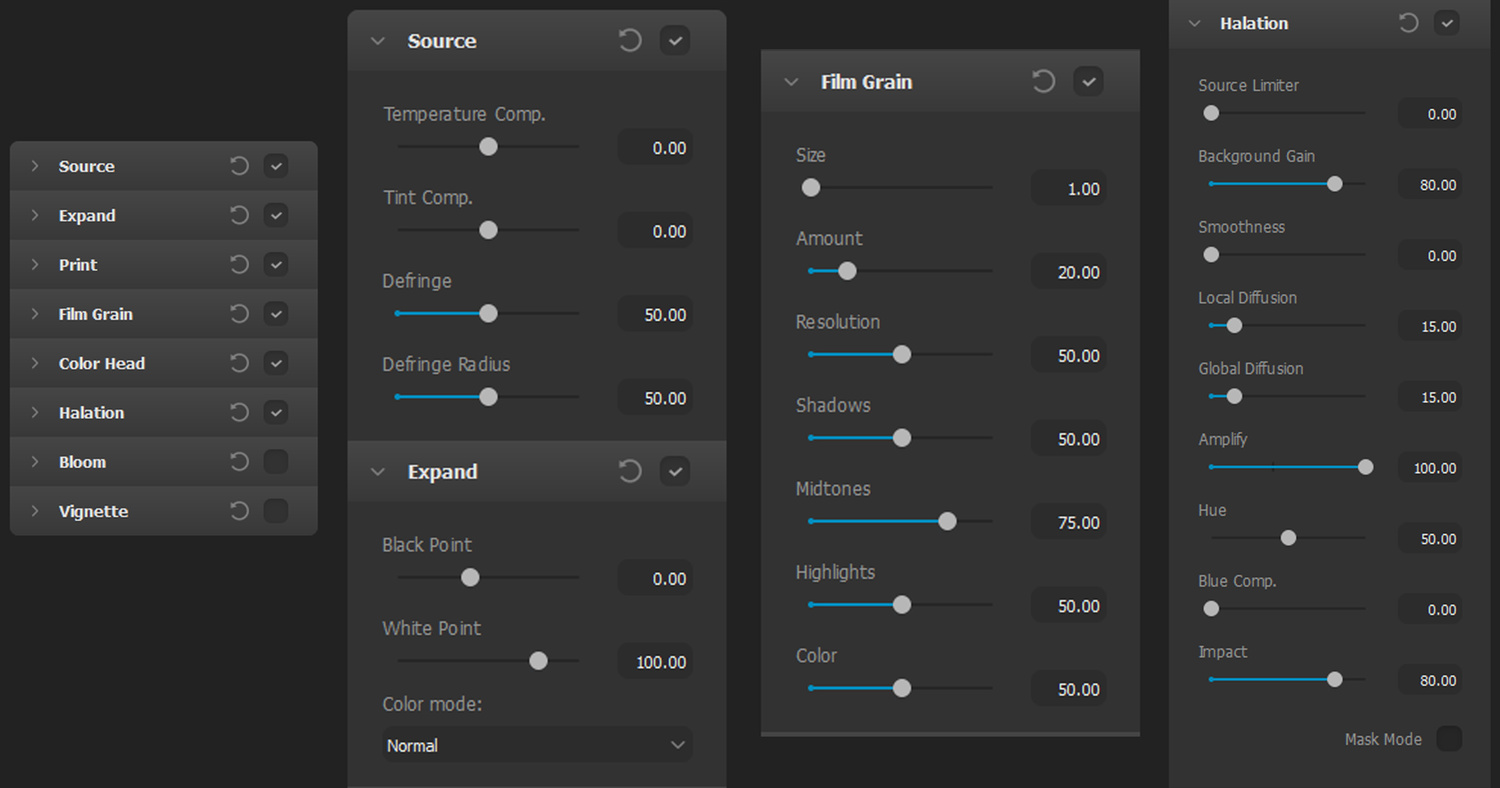 Even the grain filter isn’t just a distribution filter of grain in either uniform or Gaussian distribution. There are finite adjustments that can be made that have a different effect each time a slider is moved. I’ve included a few examples with varying adjustments below, some subtle and some pushed quite far, like in the last example. Hopefully, this will allow you to see that it simply doesn’t just increase the noise but it varies based on the chroma of the image, tones, shadows, and highlights within it also, with each one separately controllable.

With the choice of 62 film profiles and the ability to adjust and tweak them to your preferences, you can certainly create unique profiles for your images. Straight out of the box, the profiles provided are an end to themselves, but if you want to tweak them slightly, you can. Be warned, though: once you start with this, it’ll feel like you are in the darkroom again, as it’s addictive. 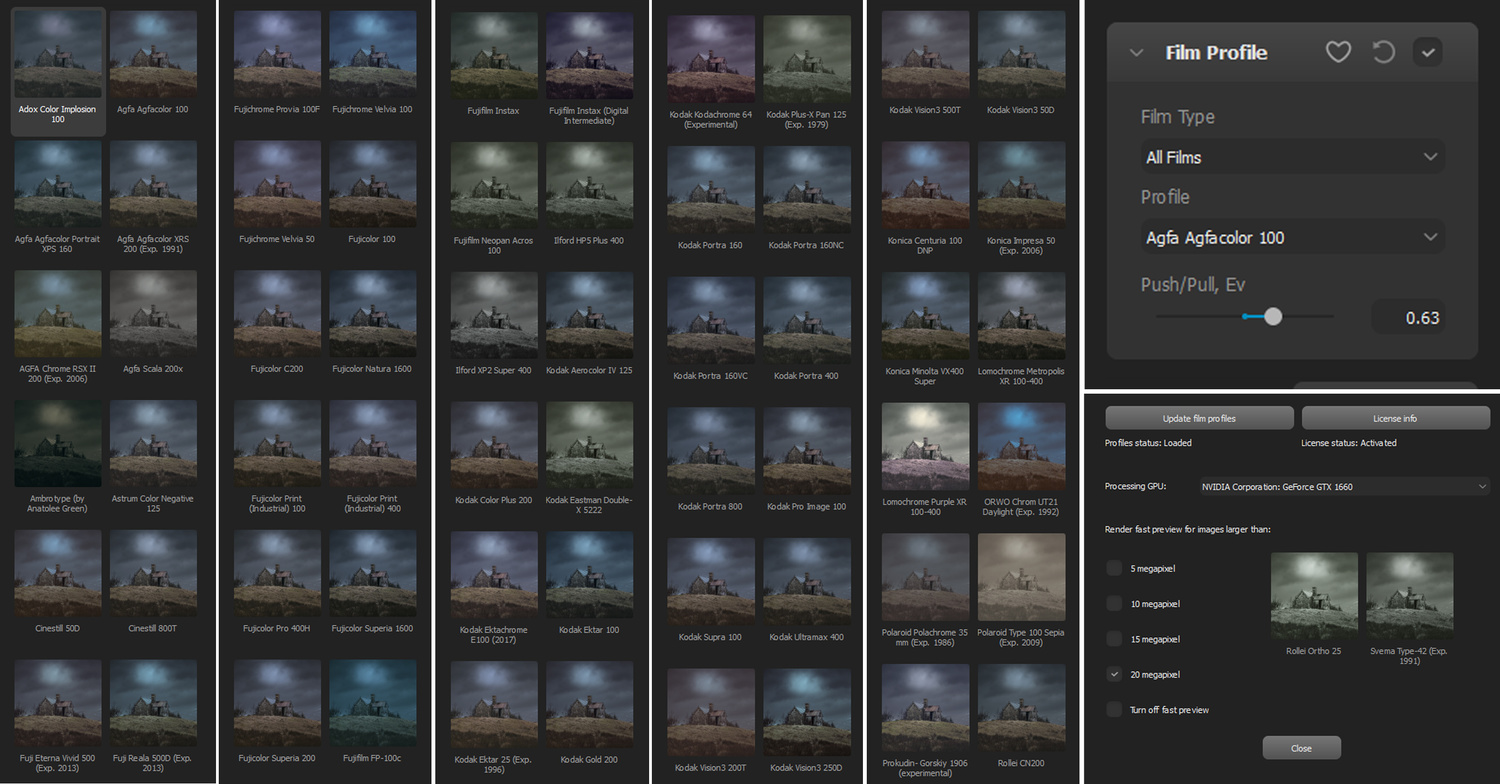 Things are straightforward when it comes to using the plugin. Run two installations, one for Lightroom and one for Photoshop, and you are up and running. The registration key is applied in the settings cogwheel window.

A simple layout and intuitive editing sliders panel make for a no-nonsense and very effective plugin that can become quite addictive to use.

Everything, simple as that. It is refreshing to see software that has a unique approach to the result. It feels like every little detail has been considered, from the initial film profile settings, to the editing approach of the sliders, to the straightforward layout of the interface.

As I mentioned, this is the beta version, but one thing I would like is to be able to view the edited image against a white background, so that you can check the color, luminosity, and contrast for printing.

Digital film has been around for a long time now, but with the advent of new techniques and software, it is now possible to emulate classic films stocks. This can be done using software or added via LUTs, but the finite control isn’t there. The Dehancer plugin is a way that you can take your digital footage and emulate classic film stocks and still have total control of the result. If you come from a film background or even if you are relatively new to film looks, I don’t think you will be disappointed with the software in any way. This is a fantastic plugin for those that want to achieve the look of classic film stocks without ever having to go out and shoot on film again.