If you’re into astrophotography, a drone typically isn’t your camera of choice. That’s why I was surprised to see Haida’s release of a light-pollution reducing filter for the new Mavic 3, which they’re calling the NanoPro Clear-Night Filter. Does this filter change the experience of shooting with a drone at night?

Drones and low-light photography have never been a perfect match, particularly when shooting with smaller, consumer-grade drones. Between the smaller sensor sizes required by the platform, the inherent stabilization challenges making long exposures difficult, and a messy regulatory environment around any night flying, night photos via drone were less common. Each of those points has changed significantly over the last year or two, particularly with the release of the Mavic 3, in my opinion. I’ve started to shoot into the night, and have been extensively testing Haida’s Clear-Night filter. 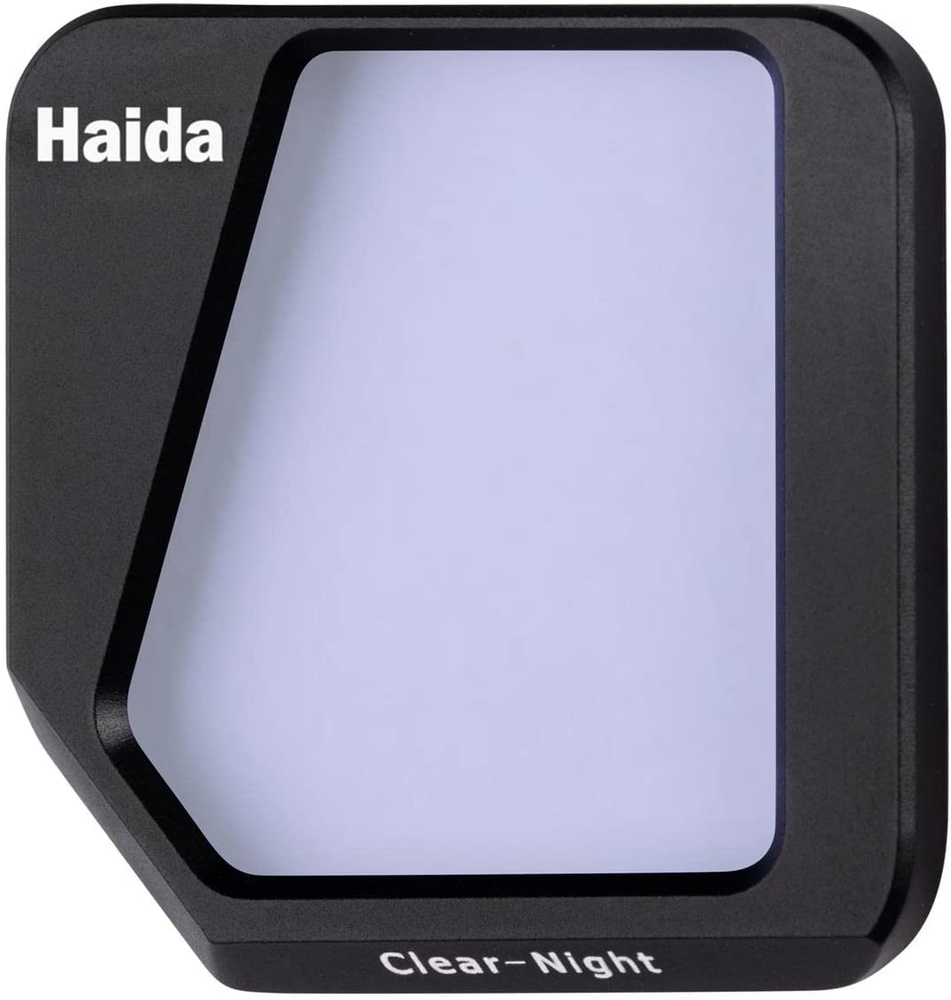 A quick note on regulatory matters: rules, restrictions, and laws will vary depending on where you’re flying. Always make sure you’re in compliance with any relevant restrictions and always fly safely. Night flights in particular present challenge to visibility and require the highest standards of care.

Back to the fun stuff: the Mavic 3’s camera is the first drone that I’ve used that is a competent night-photography tool. Towards sunset and even after the blue hour, the Micro Four Thirds sensor is capable of producing clean images with good detail. However, as you push the camera to its limits, the files are a bit more “brittle.” That means it’s tougher to make big swings in exposure, and rebalancing colors isn’t as easy.

This is where the Clear-Night Filter comes in. Fstoppers has previously reviewed the Clear-Night filter in a format meant for use with regular DSLR and mirrorless lenses, whereas Nando concluded that the filter was more useful when photographing predominantly transitional skies, namely those outside the city, but not at a completely light- contamination free site. Additionally, he found that he could replicate the effect in the city with some careful Lightroom tweaks. 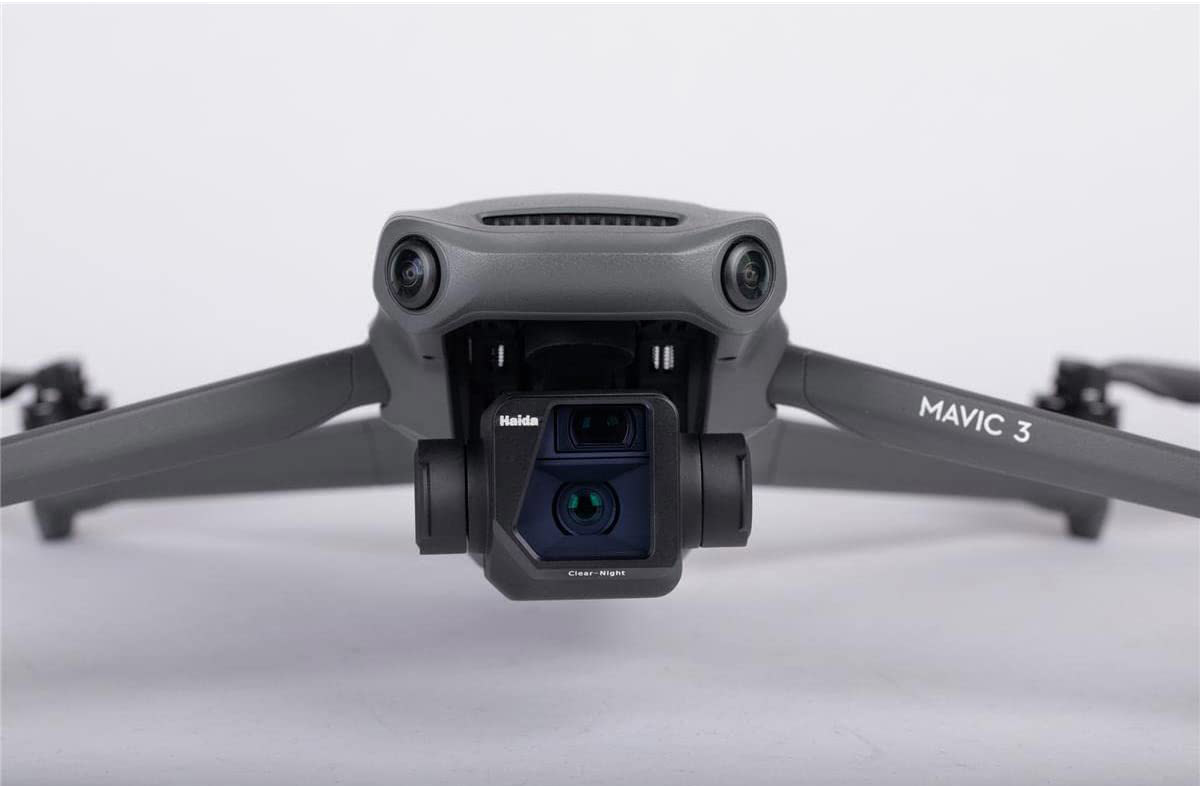 For the Mavic 3, I thought those characteristics would mean this filter would be useful. Many of my intended compositions for drone night photography will inevitably feature a lot of sodium-vapor lights, the exact color cast this filter can reduce. Also, as previously mentioned, drone images don’t hold up to heavy tweaking in post, unlike files from my Z 7, for instance. That brittleness makes the idea of ​​“getting it right” at capture more important, and filters can be a big part of that concept. Lastly, I wasn’t expecting to shoot under any true dark-sky conditions with the drone, as the tech unfortunately just isn’t at the point where you can get truly long exposures yet.

Getting an exact side-by-side test of filters on a drone is a bit of a challenge. There’s inevitably a large difference in both time and position between filtered and unfiltered shots, as you have to land, swap filters, relaunch, and line back up. As a result, I’m going to focus on the experience shooting with the filter in place, instead of trying to present exact comparisons.

I did run into one issue before I even got into the air, but it isn’t Haida’s fault. Instead, it’s DJI’s. The mounting system, at least on my copy of the Mavic 3, is awful. Attaching and removing filters is very awkward, requiring what feels like a ton of pressure on the camera and gimbal, which is a delicate mechanism. Haida has fully replicated the DJI mounting system, even down to the magnets, and there’s not an issue with their filter; it’s the entire mounting system that I don’t like. With that in mind, I’d love to see a future clip-on or magnetically attached filter that just goes over the DJI glass filter. 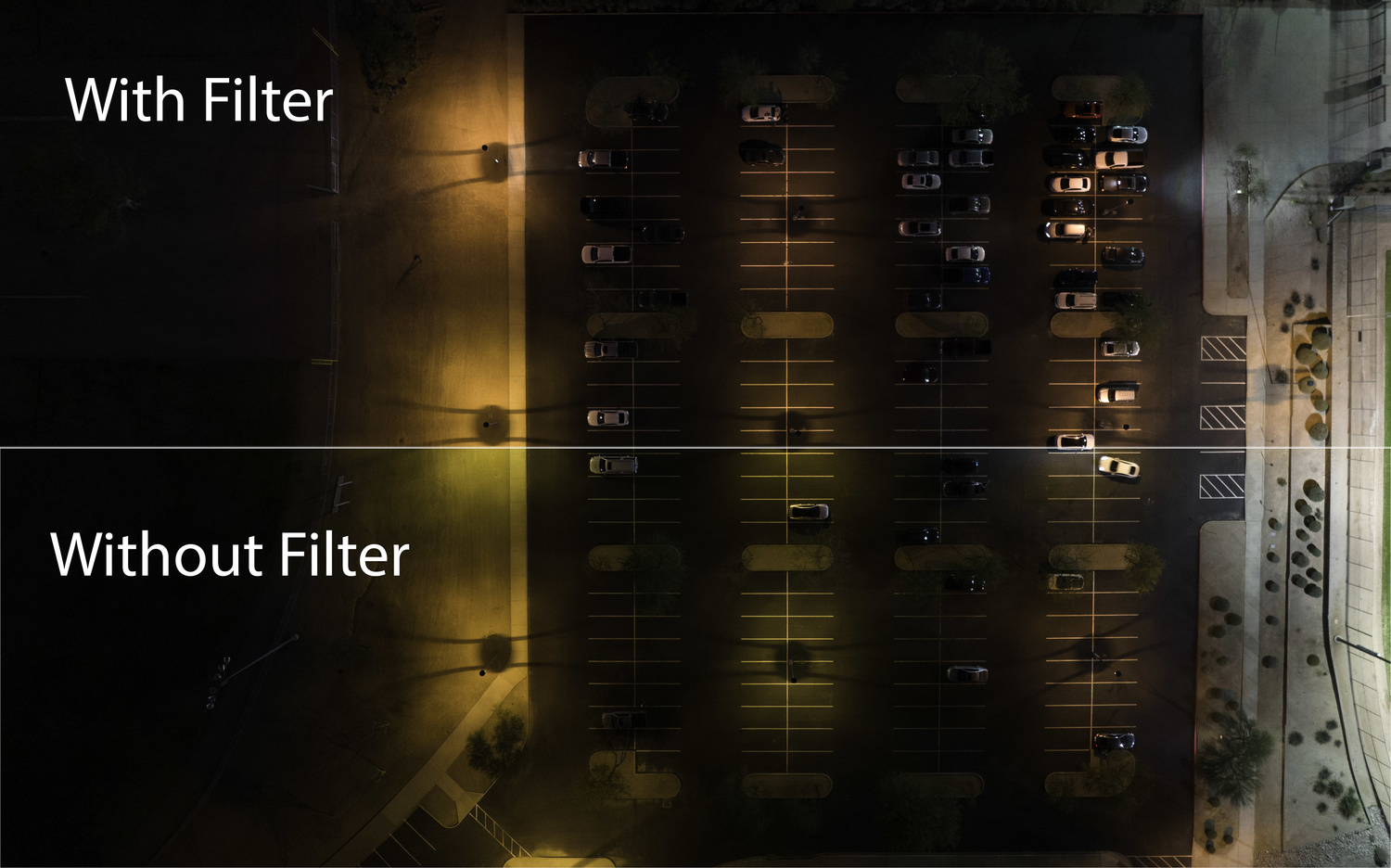 Once I got the filter on, I used it on multiple flights for shots at both blue hour and sunset, in both areas with a significant amount of light pollution and some areas with a more suburban/rural feel. In both places, I felt like the filter did make a difference in reducing the intensity of the yellow sodium vapor lights, with only a moderate reduction in exposure. It did lead to a significant color shift in those lights, as well. It seemed to shift sodium vapor lights from that stereotypical yellow to a more orange-ish color, with almost a salmon undertone.

This exposure reduction that the filter causes come from the fact that the filter is blocking some amount of light coming into the lens, and while this reduction can vary depending on what light makes up your scene, I’d guess it’s about a half-stop . It’s not massive, but could impact shots in windy conditions.

This color change isn’t unpleasant and almost makes the resulting image closer to what you’d see in-person compared to the unfiltered drone capture. I wouldn’t characterize the effect as light-reducing, however. Instead, it seems to be almost entirely a color shift. 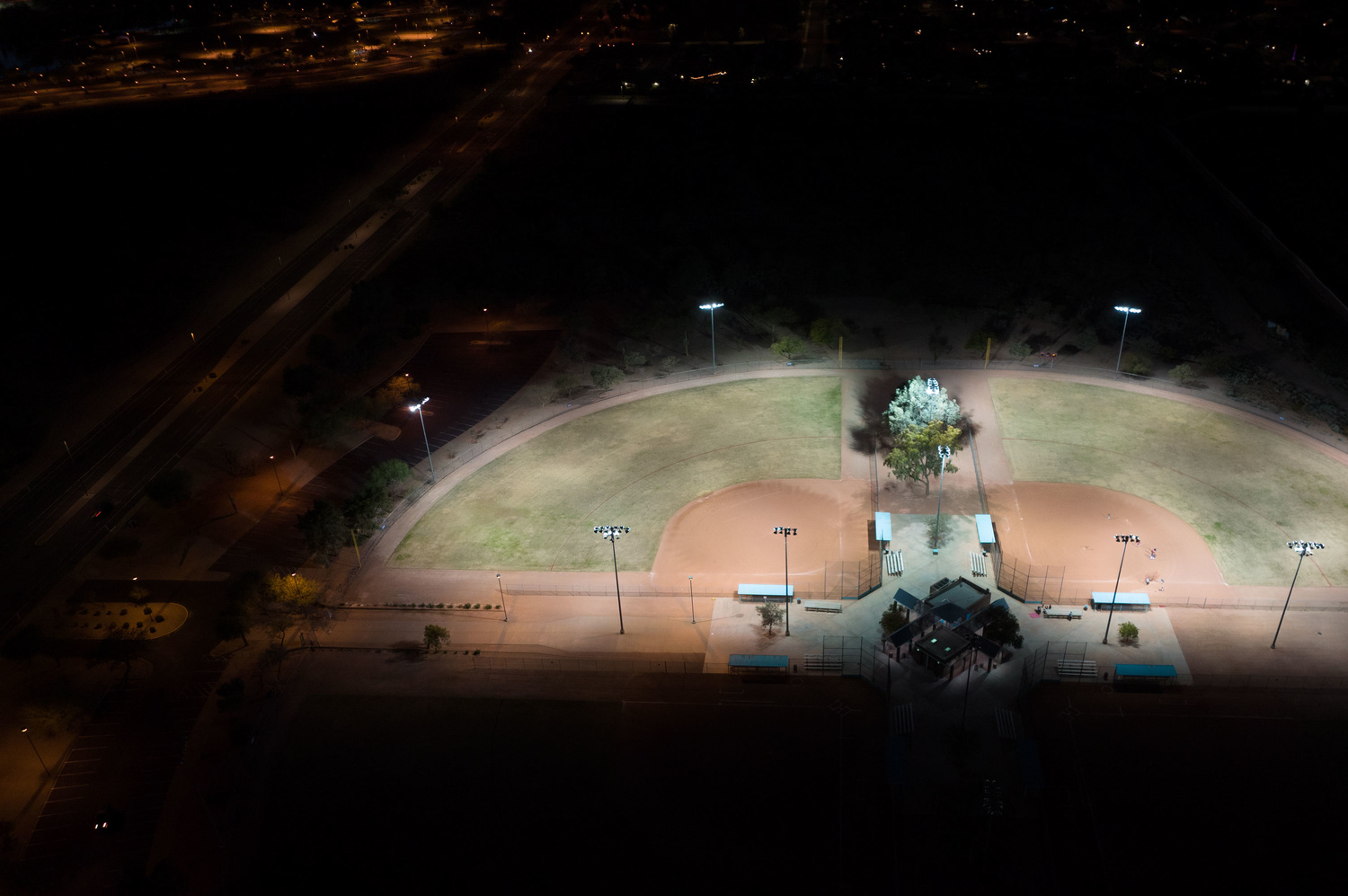 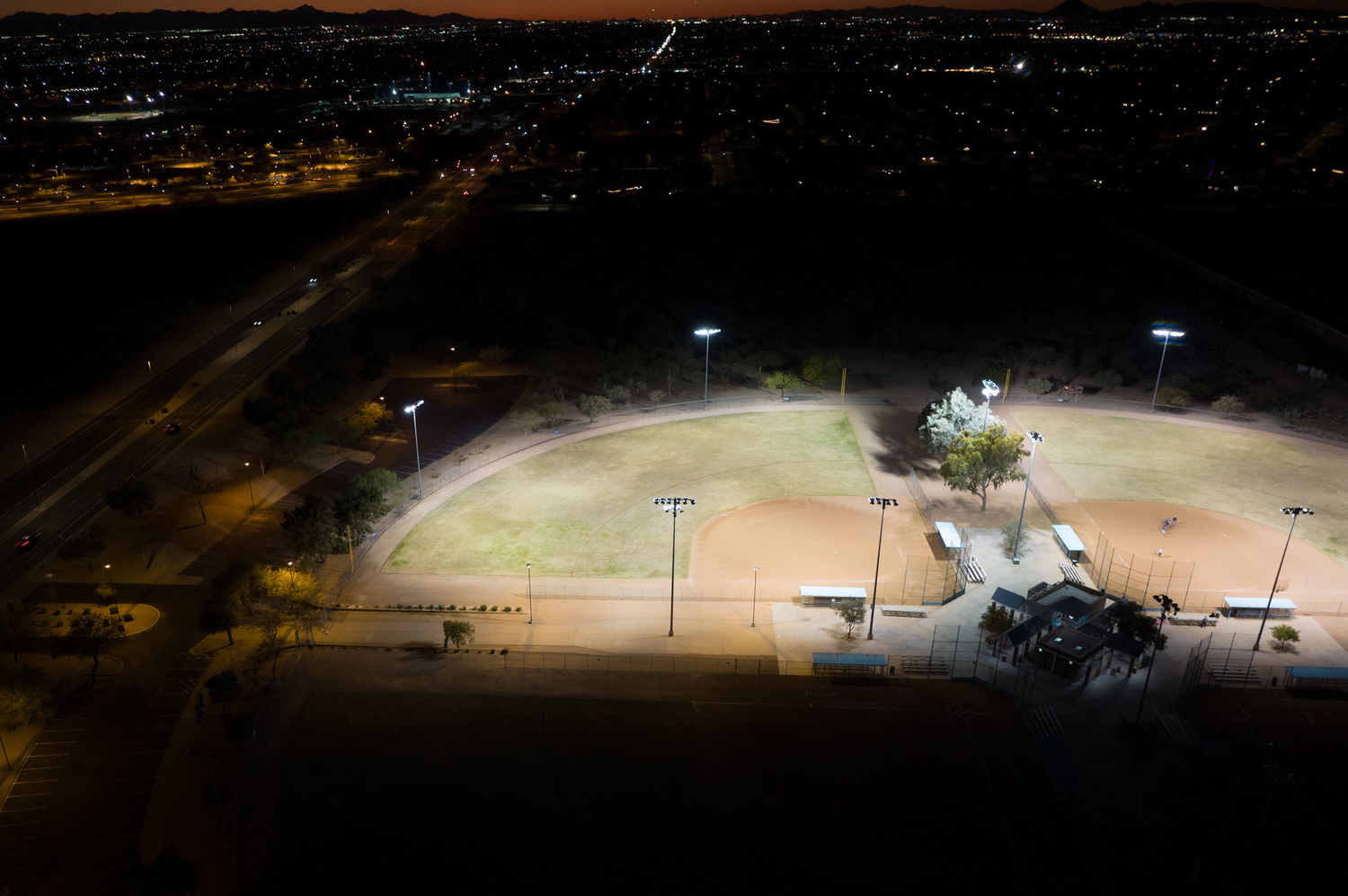 Another major consideration, as shown in the above before and after, is that the filter doesn’t have an impact on light sources that aren’t in that 589 nm band occupied by sodium vapor lights. Here, the metal halide stadium lights are virtually unaffected, as would be LED street lights or fluorescent lights in offices. The “before” is without the filter, and these shots are processed through Lightroom, with cropping to make them overlap better.

I didn’t notice a significant difference in the sky, however. I’m not sure if the camera wasn’t sensitive enough to the change, the exposure wasn’t configured to fully reveal any differences, or if the location I was in just didn’t create as much atmospheric light pollution. I did some additional testing with sky-centric photos, but couldn’t find a meaningful difference in the images. Throughout testing, the major difference in shots with and without the filter was confined to the area directly around sodium vapor lights; the drone’s camera may just not be sensitive enough to pick up light pollution.

This reduction and change in light make the use of this filter a deliberate choice. You’re trading some exposure latitude for a slightly different color palette. As both the degree of color change that you can get from the camera, as well as the degree to which you can push the exposure are limited, I think this filter is a useful, albeit specific tool. It’s also a particularly useful option if you’re shooting drone video but aren’t comfortable color grading footage. Here, it can provide a different and more pleasant look without requiring video editing expertise.

If you’re expecting to be photographing in an area with a lot of that yellowish light and it’s not particularly windy, you can trade a slightly longer exposure for more pleasant colors. On the other hand, if you’re looking to maximize the light available to your drone, the stock protective glass on may be leaving a better choice. Overall, the filter is an inexpensive and interesting option for drone photographers who shoot after sunset. The Clear-Night filter is currently available for the Mavic 3, and is also available for the Mavic Air 2, although that model wasn’t tested in this review.