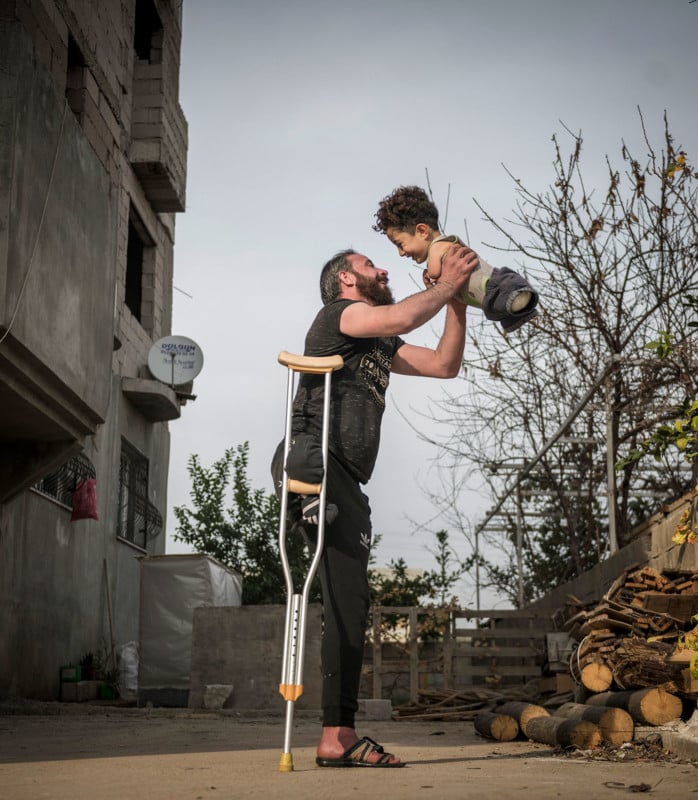 Photographer Mehmet Aslan captured an image in April 2021 of a father and son with amputated limbs in a Turkish refugee camp. His powerful shot went on to tug at heartstrings, win a prestigious international photo competition, go viral online, and completely transform the subjects’ lives.

Aslan’s emotional photo shows father Munzir El Nezzel on crutches with a missing right leg playing with his five-year-old son Mustafa born without limbs. Both father and son are the consequence of the civil war in Syria, which marked ten years in 2021 with sporadic fighting and still no end in sight—perhaps even more forgotten now with the bigger war in Ukraine.

The powerful image of the father and son duo near the Turkish-Syrian border attracted worldwide attention once it won Photo of the year at the 2021 Siena International Photo Awards. The photo, titled Hardship of Lifefirst attracted press attention in Italy and then went viral everywhere.

El Nezzel, the father of three young kids (including two girls, aged two and four), lost his right leg when a bomb was dropped as he shopped through a bazaar in Idlib, Syria. His wife, Zeinab, was exposed to sarin nerve gas during the Syrian civil war. Her medication then led to her son developing a rare condition, which left him without any of his limbs when he was born.

The Story Behind the Award-Winning Photo

“Before I took the photo, I spent time with the family,” Aslan tells PetaPixel. “We ate together and chatted a lot. While listening to their life stories, I collected data that could be photographic in my mind.

“Mustafa is a lively boy who always smiles, even though he has no limbs. You can feel his positive energy too. Baba [father in Turkish and many other languages] Munzir is very pessimistic because of the bad events he has experienced. But the hope of survival is still high.

“While we started shooting, there were places where we laughed, but there were also moments when I was emotionally worn out during shooting. One of my purposes in the photo was to show how bad the war [is].”

“I hope we can cure Mustafa,” was the first thought that crossed the mind of the veterinarian, who has been making photos since 2006 in his spare time.

The talented photographer with an award-winning gallery of images decided to enter this moving photo in the Siena International Photo Awards. The photo went on to win Photo of the Year at SIPA 2021 and a cash prize of 1,500 euros (~$1,640).

“The photo deeply touched our jurors in the first place and then all of us. It was immediately clear that it was an image with strong power,” Luca Venturi, founder and art director of Siena International Photography Awards (SIPA), tells PetaPixel. “I saw the photo when the judges finished the voting session and chose it as the overall winning image of SIPA 2021.

“We started the campaign because we were receiving from all over the world offers to help. People wanted to help and asked us how. So, we decided to open the fundraising.”

Venturi, an award-winning amateur photographer and an engineer by profession, started the campaign ‘Can a Photo Make a Difference?’ at GoFundMe to raise money for customized prosthetics and financial support for the family. He also sponsored the family through his non-profit photo festival so that they could get visas to Italy.

Aslan will be visiting Italy soon to photograph the treatment, prosthesis fitting, recovery, and rehabilitation of El Nezzel and his son.

The family is reportedly doing fine and becoming acclimated to their new environment in Italy little by little as they remain in Siena for the time being for general medical checks and treatment. The prosthesis treatment will start in a few weeks when they move to Centro Protesi Inail (Inail Prosthesis Center), a public, non-profit entity in Vigorso di Budrio, Bologna (~90 miles north of Florence).

A catholic aid organization is currently providing the Syrian immigrants a residence on the outskirts of Siena (~50 miles south of Florence) and covering their financial maintenance for a whole year.

“I visit the family regularly, and Munzir is very grateful to everyone for their contribution,” Venturi says. “Of course, the photo has given us a lot of visibility, but the main interest is Mustafa, his wellbeing and his family.”

“As a child, he has time on his side,” Mr. Teti [the director of Centro Protesi Inail] tell the New York Times. “Research will probably allow him [son Mustafa] to drive a car and get to work autonomously when he is older.”

Photographer Mehmet Aslan and photo festival director Luca Venturi have both contributed actively to not only helping one family in dire straits but also to shining a spotlight on the plight of all war victims, especially in countries where medical help is just a luxury for the majority of their people.

About the author: Phil Mistry is a photographer and teacher based in Atlanta, GA. He started one of the first digital camera classes in New York City at The International Center of Photography in the 90s. He was the director and teacher for Sony/Popular Photography magazine’s Digital Days Workshops. You can reach him here.