Sometimes the best camera is the one you have with you and at times it’s not your DSLR or mirrorless one. This is difficult because there are pros and cons to both options. If you have a mobile phone with you, then that can be the best option. However, if you need a more professional or reliable camera, then your DSLR or mirrorless will of course be the better choice.

There are moments when you can’t use your professional camera though and it’s in these times that we normally reach for our mobile phones. The pros to using a mobile phone camera are that you can take photos quickly and without much hassle, and ultimately, it depends on what is most important to you and what will work best for the specific situation.

For myself, I was a loyal Samsung user. I thought the images and the spec of the camera were ok considering it was a mobile phone. That was until I wanted to take a photograph that included the sky; then it seriously let me down. Although the images were not terrible, they lacked detail and the vibrancy was out of this world. To the point where I actually thought that Samsung had created a whole new color gamut that they were trying to unleash on the world. So I began to use my phone less and less to capture the handy shots, the moments, shall we call them. The shots where you decide to capture a scene or a memory quickly instead of using your camera.

It does really depends on the situation and what you are looking for in a photograph. For example, if capturing moments quickly with your phone is more important to you than having high-quality images, then using your mobile phone might be a better option. Conversely, if you care primarily about quality over speed and want to use the best camera possible — even if that means bringing along a DSLR or mirrorless camera — then that’s entirely up to you. For myself, however, I wanted the best of both worlds. 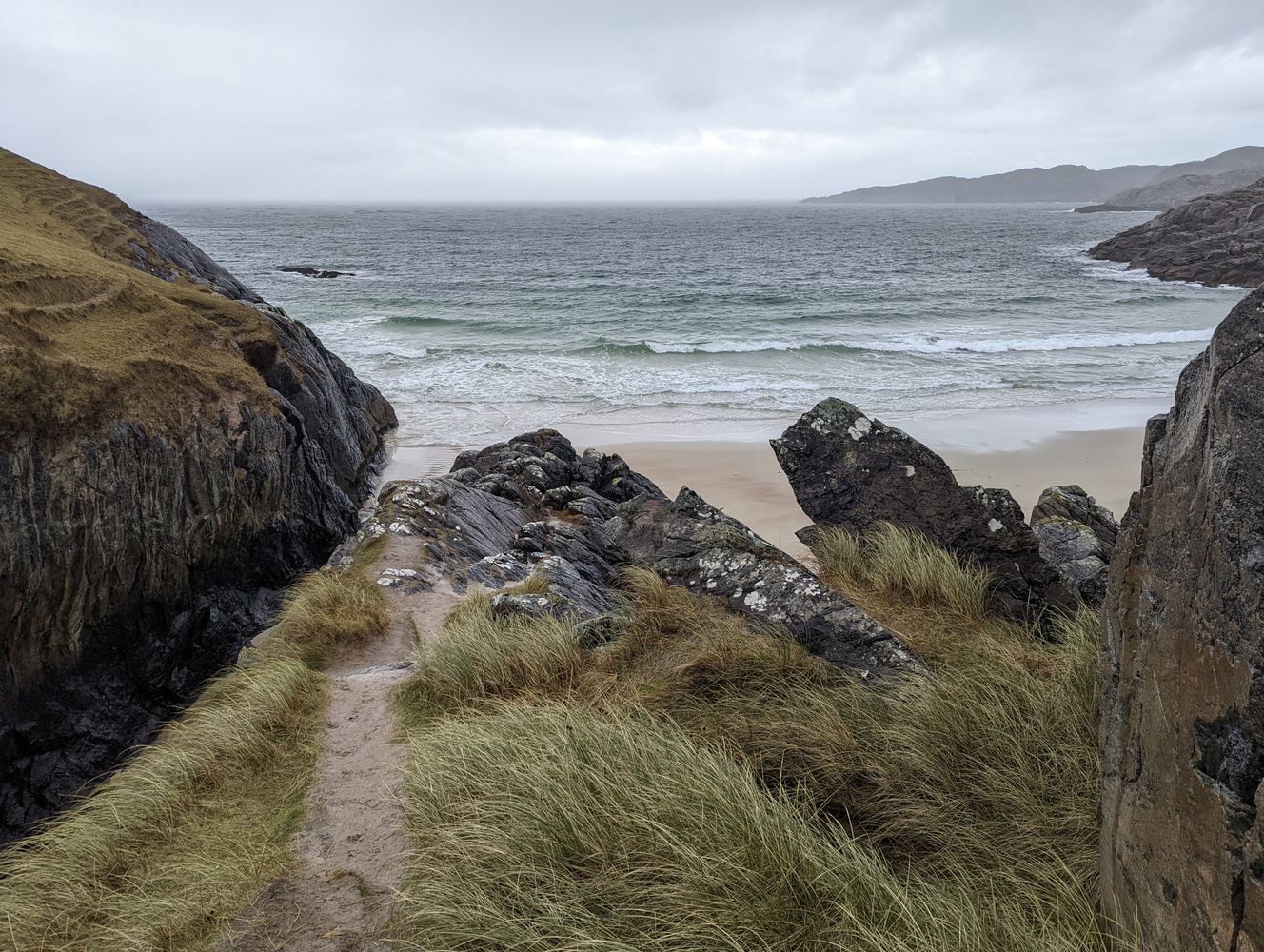 I wanted to be able to capture these moments with my mobile phone and not be concerned about whether the person or scene had a sky in it, or had to really suppress the saturation to get any form of decent snapshot. I live in Scotland and we mainly get gray skies, but oh no, not with a Samsung. With the Samsung, the resulting images looked as if gray skies had a vibrant blue or teal, and we would often joke about the vivid and nuclear color reproduction.

So, I reached for my mobile phone less and less. It became its primary function again and not a handy carry all the time camera. I love the mobile phone for that; I can take snapshots and capture memories wherever I am without worrying too much remember about the overall quality, as it’s nice to see and these moments visually.

The last time I used my Samsung for a photograph was about 3 weeks ago when on a workshop in Glencoe. The usual gray moody skies and it was raining, of course, I thought the shot would come out ok, more fool me. The water and mountains were never that color. 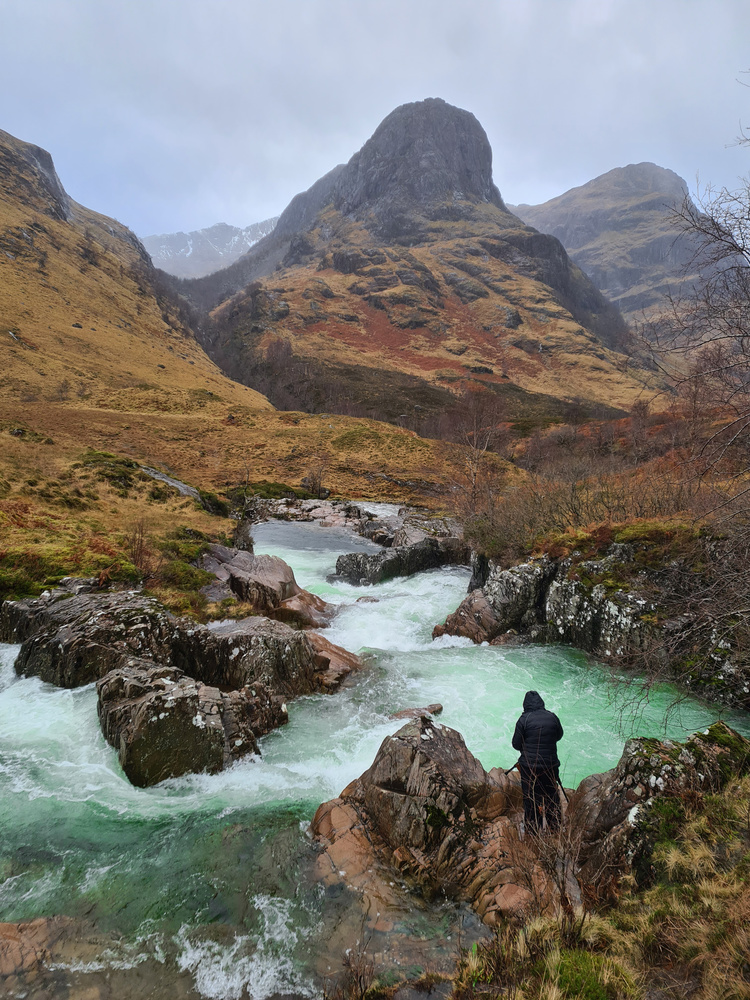 So what changed? Well, I upgraded my phone to a Google Pixel 6 Pro and that’s when things really started to change. The detail in the images was fantastic for a mobile phone camera and it truly showed how versatile a good mobile phone camera can be. Because of this, I haven’t hesitated to reach for my mobile phone so far in any situation and I love that I can be spontaneous and just snap away. But is this really photography? to be honest it doesn’t really matter? What’s important is that I’m capturing memories and moments that matter to me, no camera required.

When I purchase a phone I honestly buy it for the camera, the best tool for the job so to speak. And although you may be an iPhone user or any other of the brands, the camera in the Pixel 6 pro is the best camera for me, and what I need from it. The rear camera contains a

The front camera is 11.1mp with a 94° ultrawide field of view, but I’m not into selfies so this one is not so important for me, anyway. So you can see that the specs are quite decent in today’s mobile phone camera market. Although the rear camera sits proud of the housing this actually, in my opinion, helps with the use of the phone when typing or flipping through images as it doesn’t have that awkward rolling when the camera lens is offset.

Using the camera is fairly straightforward as well and we are all more than used to that by now. In its simplest form, you can just snap away or you can choose to focus on a point. When doing this another three sliders appear; temperature, contrast, and brightness. These do what they say on the tin without any adverse effects on your image, allowing you to control your final output.

Other functions of the camera include Night sight, Motion, Portrait, Video, Panorama, and Photosphere. As yet I’ve only experimented with night sight and motion (long exposure) and the results have been good for a mobile phone. Most of the options mentioned also allow for the zoom function to activate up to 20 times zoom, except for the portrait mode which is only 2 times. I would attach the phone to a tripod if considering a night sky hot at that range as we shake too much.

Currently, there is no macro mode but I do read it’s in the pipeline for a future update, so time will tell how that performs. For now, though it snaps away ok.

So how does it perform for what I’m after?

To start with I’m not going to say that you should be shooting landscapes with a mobile phone, it’s not unheard of, but for myself, that’s what my camera is for. However, I was really impressed with the detail and clarity that the Pixel 6 Pro delivered when shooting landscapes. I love that you can get some great abstract images without having to reach for your camera, something which is very liberating in your photography workflow.

All the images in this article are straight from the phone, with no editing, so that you can see the images as they are straight from the camera without the post-processing that’s always included in the adverts. The mobile phone is also able to capture lush greenery and wet surfaces incredibly well. It also has a long exposure feature which is fun to use for capturing waterfalls or night shots. Although this may seem quite gimmicky, if you think about it this is just a mobile phone and I did enjoy seeing the results it produced. Not quite what I expected but good enough to make me smile and that I had made the right decision in switching phones.

Apart from the gathering of memories, I use the mobile phone to check the composition of my shots before setting up the tripod and camera, as this is much quicker and easier, and I’m sure most if not all of you do the same. Now that I can include the sky in the setup of the shot I’m more than happy. 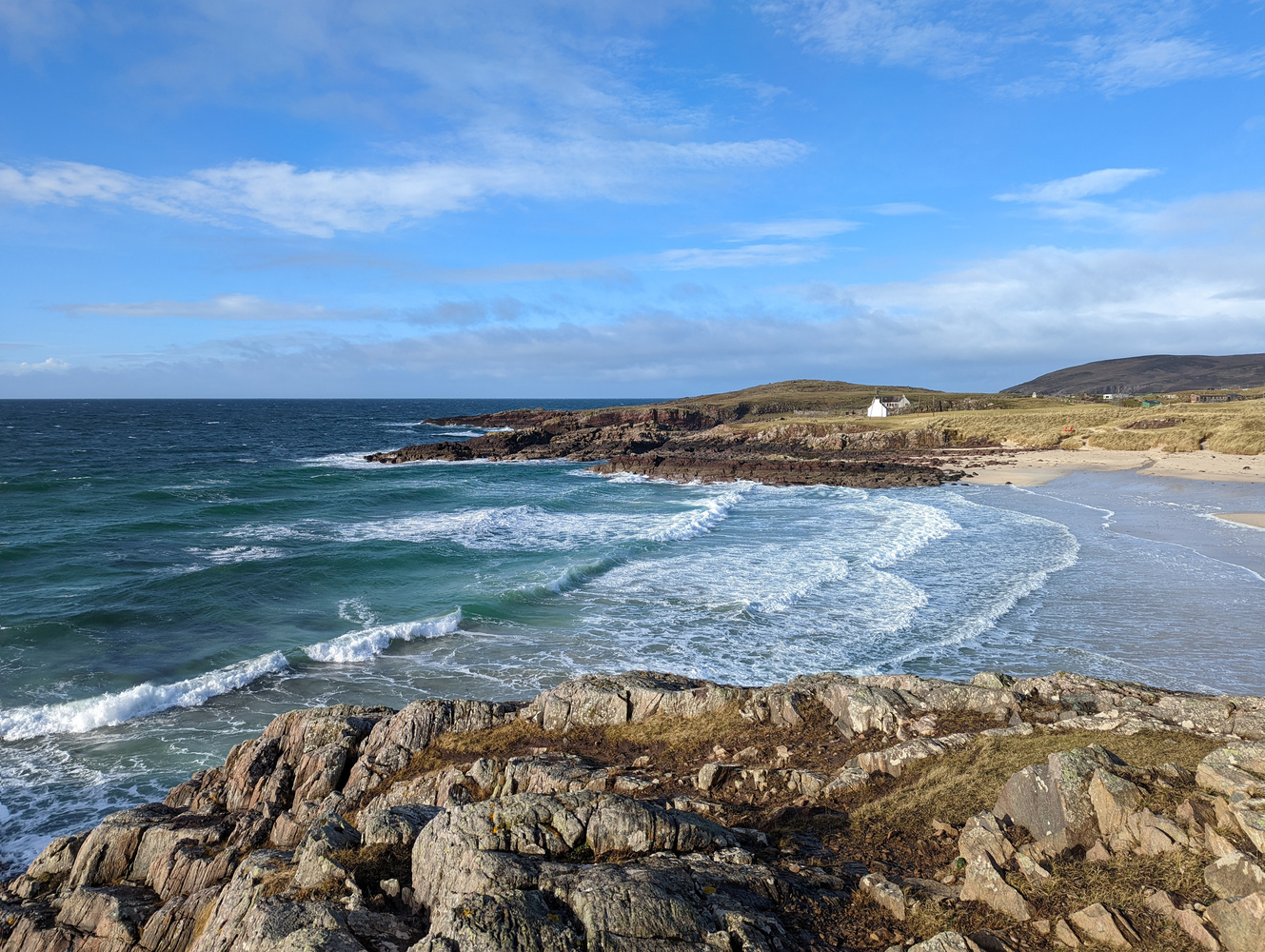 The 20 times zoom feature also surprised me when it came to the quality of such a small sensor. Meaning yet again I can inspect a telephoto composition without breaking out the lens. It’s a useful feature but with its limitations, with that one being user shake. Imagine trying to shoot with a 100-400mm lens at 400mm, arms outstretched, and viewing with the scene via the LCD screen; you get the idea. The best way I found is to support it in some fashion, a rock, a fence post, anything just to get the view. 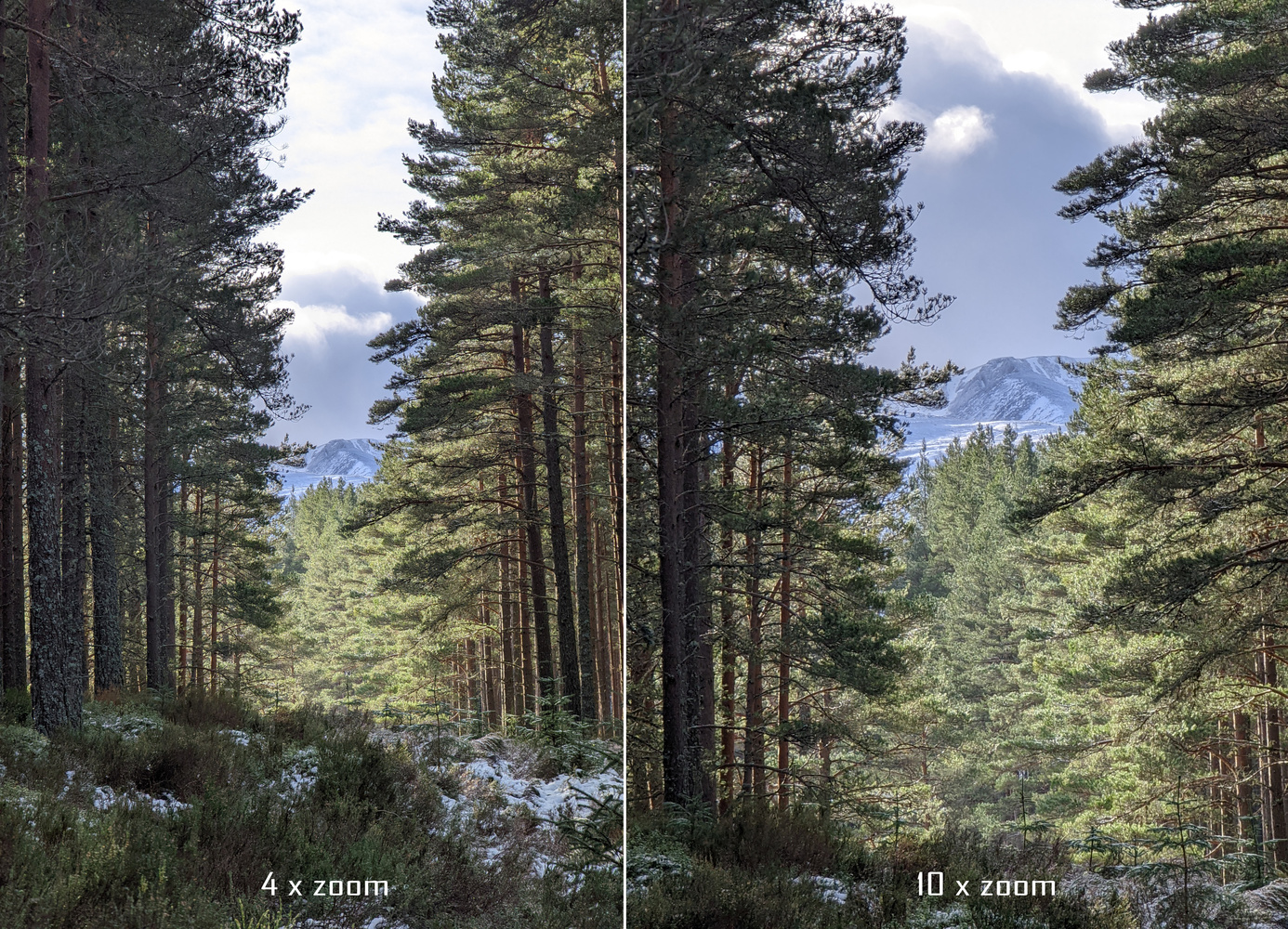 The images of the building below definitely highlighted the shake when trying to capture 20 x zoom, but that was to be expected at such close proximity. The images were captured at 2x,4x, and 20 x zoom.

Editing on the Phone

With the choice of so many different editing apps available, sometimes choosing the one that suits your workflow for mobile editing, or perhaps snapshot editing can be a little overwhelming. As an Adobe subscriber, I have Lightroom mobile on my phone as well as the Snapseed and Lens Distortion apps, all of which I use frequently, with the former being the main one. The Google Pixel 6 Pro comes with, as all phones do, a built-in editor, which produces some neat results without too much effort. You can’t use masks like the above apps but it does work well for tweaking your images. There is even a magic eraser tool which again works well considering this editor comes with the phone.

The ease with which you can use the camera and its functions. No longer do I need to go into the pro mode to capture a half-decent mobile phone shot. The fun of the long exposure images. Selfishly, I’ll include skies in this; I can shoot skies again. The built-in editor with its array of tools and presets. The haptic response level when using the camera.

So far for the camera, I haven’t found anything that has made me question my decision of swapping from Samsung. In fact, I wish I had swapped earlier, as perhaps I would have captured more memories

Should You Consider The Pixel 6 Pro?

Should you consider the Google Pixel 6 Pro if you’re considering shooting landscapes with your mobile phone? well, the Pixel 6 Pro is a great option and delivers stunning detail and clarity and not just for landscapes. Although 20x zoom may not seem like a lot, it can be quite useful for capturing small details or when you want to get closer to your subject. The long exposure feature is also helpful for capturing waterfalls and night shots. The functionality of the camera is quite straightforward and you have the option of capturing both .jpg and raw files. All of this and more makes the Google Pixel 6 Pro a great option for quickly capturing landscapes, memories, and other photos.