Social media is a beast. You need to feed it every day with content.

I tried to do that last year, and I was posting on a schedule of three times a week to Instagram. I did get a steady gain in followers, and honestly, I think I could have gotten more if I posted every day or even multiple times a day. But this was draining. It wasn’t feeding me or moving my soul. It got to the point where I cared less and less about the numbers. This isn’t to say that I’m at some huge follower count.

I’m much more interested in sharing more authentically. If I have something happening, I’ll put it up. If I’ve made an image I’m particularly proud of, I’ll share it. As a disclaimer, this is what works for me. Your mileage may vary.

But the point is: I’m enjoying using social media in such a way where I’m using it to leverage real-world connections. Come to my real-world show. Come see my real-world work in a real live gallery. Let’s have a chat. I don’t particularly care for likes or engagement or numbers because I feel that those aren’t real. Likes and follower counts don’t pay my bills or feed my soul.

This leads me to segue into this: it is ok to simply say no to things.

There is a limit to things you can choose to remove yourself from. I can’t say no to doing my taxes. I can’t reasonably say no to my physical well-being and not go to the doctor or dentist. I don’t particularly enjoy doing these activities in and of themselves, but doing them at least makes me feel that I am growing. Doing my taxes is a very real way to gauge how I did financially that year. Taking care of my physical self makes me thankful for the health I do have and also makes me realize the privilege I possess to live in Australia, where there is socialized healthcare.

Posting to Instagram like some gerbil on a wheel, not so much. I don’t care for it.

I’m still making photographic work. But I’m doing it at a pace that works for me. In the name of transparency, I’ll make one, maybe two series of images a year; but these will be conceptualized in greater detail with a clear intent of actually saying something, which adds to artistic discourse and hopefully contributes to a photographic canon.

Seeing photographs printed and in a real gallery, for me at least, is significantly more rewarding than the same images being viewed on social media. I’d much rather have one person visit me in a gallery and have a genuine conversation with them than have hundreds of followers on social media. I believe photographs weren’t intended to be viewed digitally.

For me, it is about the pictures. Having real-world shows and being able to track them on something like Mutual Art is the best feeling in the world.

In my opinion, seeing an expanding resume of gallery shows on Mutual Art, which aggregates shows, is a much more fulfilling feeling than anything else in the world. I wasn’t meant for Instagram. 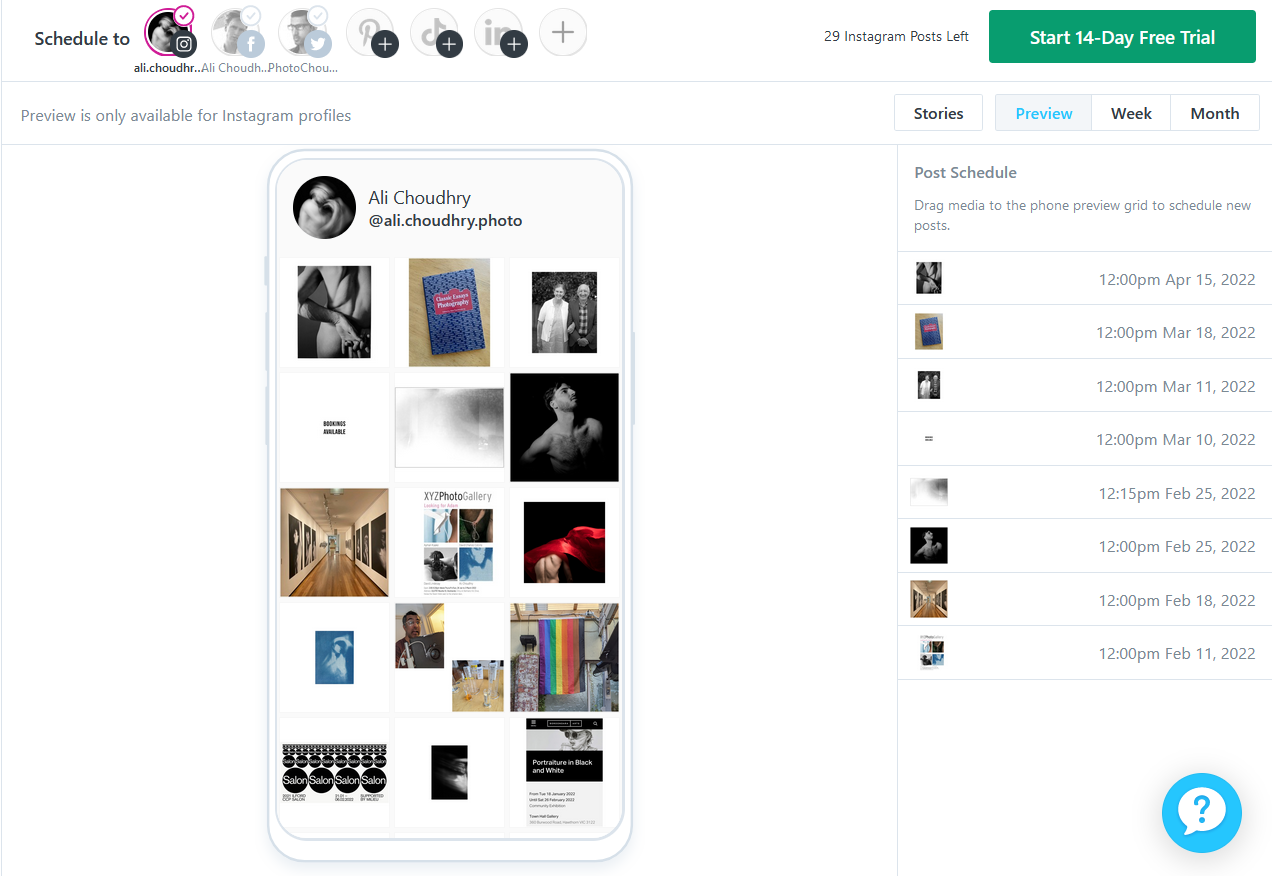 My other problem with social media is the likes race. I post something. I get likes. It’s a dopamine hit. If something doesn’t get as many likes or comments as I think it should, I get upset. What am I doing wrong? To help alleviate this cycle a bit, I’ve recently started using the free version of Later. Instead of the post-like-post-like treadmill, Later helps me to make a post and take my time making it, and then, the platform “posts” it at a later date. I try to schedule it when I’m at work or asleep or doing something else; This way, when I finally see the actual post and resulting engagement, there is a fraction of disengagement on my part. Me that posted it isn’t me that views it.

Find What Works for You

I don’t want to discount how someone, such as you, the reader, might make or share images. I’m simply sharing what works for me. But if what works for me has piqued your interest, then here are some closing thoughts.

At the beginning of this article, I mentioned that there are some things I do that I don’t particularly enjoy in and of themselves, but are almost a necessity. Unfortunately, social media is one of those needed evils. Creatives, especially smaller creatives, have to live with it. But how you engage with social media is completely up to you.

I think this Brendan Maclean quote, from his Twitter, to be a much better summary of this.

Here’s an earnest tweet: never discount how interesting the simple things in your art practice are to people. I gave someone in the front row a set-list and they were so wrapped, they had no idea they existed.

We all feel like content machines but it doesn’t all have to be comedy sketches and viral media. ‘The work’ is always a cool thing to share.

I had been doing a bit of this on Instagram, but what made this idea pop was when I had some family visit from interstate. As a little day activity, I made some photographs of them on film, and then, we developed and scanned them together. There is almost a magic to what creatives do from the perspective of non-creatives; they were enamored! Something boring for you might be magic for others.

Which leads me to close with this: what are some strategies you utilize to engage with social media?